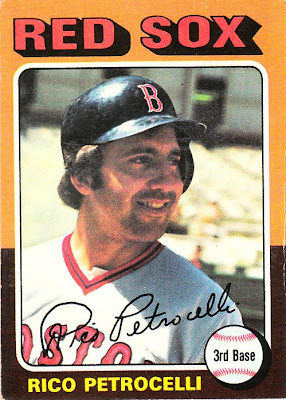 Card fact: I am too outraged by the fact that Chris Cannizzaro received a card number ending in "5," and Rico Petrocelli did not to even come up with a fact. You may address your complaint letters to Topps.

What I thought about this card then: I never saw it. I remember his final Topps card, his 1977 card, because it was one of the few Red Sox I owned from that year. My brother was/is a Red Sox fan and all Red Sox automatically went to him. I would only get dupes.

What I think about this card now: Who is Petrocelli smiling at? Any guesses?

Other stuff: People made a big deal in the '80s and '90s when shortstops started putting up big home run totals, but Petrocelli was a slugging shortstop in the 1960s. His power gradually increased until a break-out 1969 season when he hit 40 home runs and drove in 97. His batting average, on-base and slugging percentages took huge leaps that he wouldn't match for the rest of his career.

Petrocelli was always a strong fielder, but when Luis Aparicio came over to the Red Sox in the early '70s, Petrocelli moved to third base (I didn't know he was a shortstop until a long time after his career ended).

Petrocelli hit two home runs in the 1967 World Series and hit .308 in 26 at-bats during the 1975 World Series. A career-long Red Sox player, he retired after the 1976 season as injuries started plaguing him.

Afterward, Petrocelli worked as a minor league coach and manager and did some TV work on Boston-area stations. He is still a radio presence in New England. 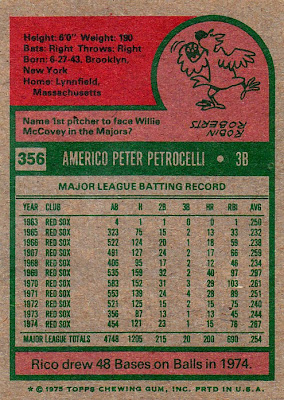 Back facts: If you think the cartoon question is random, get a load of the write-up at the bottom. Unless Petrocelli was drawing zero walks every other year, who the hell cares?

Other blog stuff: The "orange-brown" color combination is back into sole possession of the overall lead as this is the 34th orange-brown bordered card in the set.
Posted by night owl at 1:07 AM

The walks comments is kind of ironic since Bill James (who's obsessed with walks) is a Senior Advisor on Baseball Operations for the Boston Red Sox.

Yea, but it has a question mark. You don't think there was some questionable editing at work do you? Only on every other card. He had as many as 98 walks in a season. That 48 was not a big deal. Maybe it was the first thing that came to mind and would fit in the alotted space.