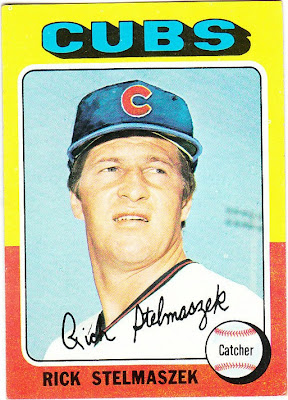 Card fact: This is the last Topps card issued during Rick Stelmaszek's playing career. He didn't play in the majors past 1974.

What I thought about this card then: I never saw it. In fact, I was totally unaware of this player until I was completing the set a few years ago. I'm kind of proud of my knowledge of ballplayers from the mid-1970s. Thanks to collecting baseball cards back then, I got to know just about all of them. But when completing the set, I came across a handful that were completely new to me, and threw me for a loop -- "how did I miss this guy?" Stelmaszek was one of the ones I missed.

What I think about this card now: Stelmaszek is majorly airbrushed into a Cubs cap. It appears he's wearing an Angels uniform, which is funny, because on his 1974 Topps card, he is airbrushed into an Angels cap. Stelmaszek appeared on a couple of those three-rookie cards in the early '70s, but the '74 and '75 cards are his only solo cards, and he's airbrushed into his new team on both of them!

Other stuff: Stelmaszek was a career backup catcher for the Senators, Rangers, Angels and Cubs between 1971-74. He didn't have more than 44 at-bats in any one season, and he hit .170 for his career. I'm actually surprised that he made the set this year. He must've been one of the last players to make the cut.

After the Cubs, Stelmaszek kicked around in the minors with teams like the Yankees and Expos until taking up a coaching career. He has been a coach with the Minnesota Twins for the last 30 years.

For all things Stelmaszek, you need to visit Johngy's Beat. The blog's author was a neighbor of Stelmaszek and his blog is filled with stories about him. He also sponsors Stelmaszek's baseball-reference.com page. I may not have heard of Stelmaszek a few years ago, but I sure know about him now. 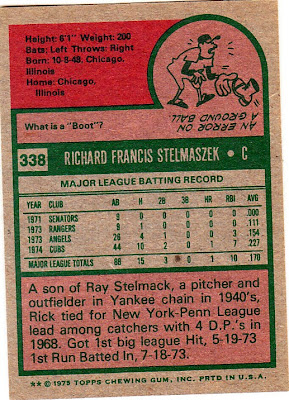 Back facts: Stelmaszek's father's last name was "Stelmack"? Perhaps dad altered the family name? Or maybe a bloop by Topps?

Also, I just missed publishing this card on Stelmaszek's birthday, which was Friday.

Other blog stuff: On this date 60 years ago, Susan Anton was born. If you remember Susan Anton, then you really are a child of the '70s. I don't think I've thought of her in 30 years.
Posted by night owl at 2:44 AM

baseball-reference.com has Stelmaszek's dad listed as "Raymond Stelmack", but with the note "real last name is Stelmaszek". It looks like he anglicized his name for professional purposes but didn't legally change it. To add to the name confusion, Johngy's blog has a picture of a 1970 Topps three-rookie card on which Rick Stelmaszek is identifed as "Dick Stelmaszek".

Stelmaszek started the 1974 season with the Angels, but played only at AAA for them this year. On July 28, he was traded to the Cubs, who used him only in the majors for the rest of the season.

The Cubs appear to have started the 1974 season with three catchers on their roster: George Mitterwald, Tom Lunstedt, and Adrian Garrett (Garrett was not exclusively a catcher, but more of a jack-of-all-trades utility man/pinch hitter type). Garrett was apparently demoted to AAA in May, and it looks like Lundstedt got injured in June (he did not appear in any games in the majors after June 17, and he only played three games in the minors all season). To take their place, young phemom Steve Swisher was called up from the minors, and Stelmaszek was acquired from the Angels. In deciding to include him in the 1975 set, Topps was probably looking more at how the Cubs used Stelmasek after they got him than at his 1974 season as a whole.

Thanks for the shout out.
Also, MCT summed it up pretty well.
One other tidbit. Rick and his wife were set to move to California. She quit her job and they sold their house. Then the unlikely happened and he was traded to the Cubs. They moved back and have lived in Chicago since.

Nice to have a blogger connection with Johngy. That is a nice example of an airbrushed cap.