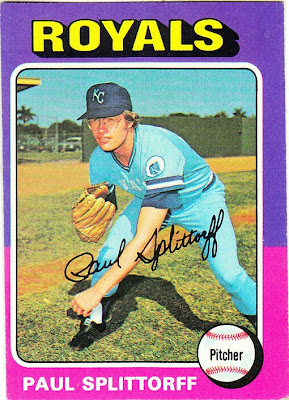 Card fact: It's been 66 cards since the last purple-and-pink bordered card. That's a long time for a color combination that's a favorite to win the color combo World Series.

What I thought about this card then: I didn't see it, although the first card of his I did see looks a lot like this one. Like many of the Royals from the '70s, I associate Paul Splittorff with my friend Jeff, who moved to my neighborhood from Kansas.

What I think about this card now: Between the purple-and-pink border and the powder blue uniform they're doing their darndest to distract you from the palm tree in the corner. But I see it!

Other stuff: Splittorff was a career Royal, pitching 15 years for Kansas City. He was there for the bad times and the good. He won 20 games in 1973, the first Royal to win 20. He also won 19 during the Royals run of pennants in the late 1970s.

Because of Splittorff's glasses, he was one of the first nerdy-looking players that I knew. But I also distinctly remembering something that Splittorff did that was definitely not nerdy. He used to stare down batters after striking them out. It was weird and cool at the same time. I wonder how that would go over today.

Splittorff became a broadcaster for the Royals after retiring. Recently there's been a lot of talk about his broadcasting. He began to sound funny on the air and viewers speculated that he was drunk or had a stroke. Splittorff said he hadn't had a stroke, but was suffering from an illness that affected his speech. He took some time off. He's back working, but apparently still not 100 percent. From what I've read, some fans just want him off the air.

EDIT: In May of 2011, his family confirmed that Splittorff was suffering from oral cancer and melanoma. He died on May 25. 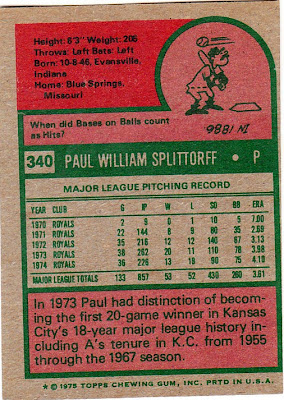 Back facts: Splittorff apparently earned a card number ending in zero based on his 1973 showing, because 1974 was a bit of a comedown.

Monster Congrats on keeping this up for a full year! This blog has been extremely entertaining and it's often the first thing I read when I sit down at my desk in the morning. I look forward to year two ... and year three when you move to the 1976 set (?)

The two Splitorff cards are like that kids game where you have to "spot 10 things different about the photos."

thanks for this, as each posting usually signals it's time for me to go to bed...

although you've become rather random lately... :)

Many congratulations on the one year mark. This is definitely on my must read list (even when you post on the weekends and I have to play catchup on Mondays).

The first thing I noticed was the palm tree. Funny.

This reminded me of the time I met Splittorff and Buck Martinez at Comiskey Park on a cold, wet October night. They were in full uniform and in the concourse. I was about 10 and didn't think much of it. I have no idea what they were doing. My friend and I still laugh and question it.

Is there a zero-number-card jinx?