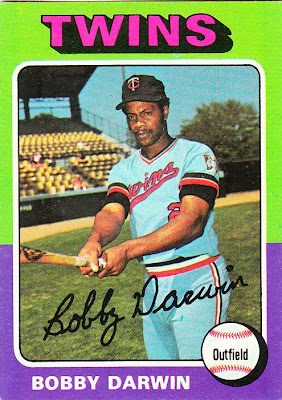 What I thought about this card then: Like I said, I had the mini card. I wish I scanned it, because it looks like it has been folded in half ... twice.

What I think about this card now: Anytime I see a player swinging a bat without batting gloves -- even in a posing situation like this -- it looks bad-ass.

Other stuff: Darwin began his professional career as a pitcher. He pitched in one game for the Angels in 1962, then went back to the minors for seven years. When he re-emerged, he was with the Dodgers and pitched in three games. But he had also learned to play the outfield. By 1971, he had left pitching behind and was a full-time hitter.

The Dodgers traded him to the Twins, which is where Darwin found his niche for a few years. His best season was 1974, when he hit 25 home runs, drove in 94 and was among the top 10 in the league in both categories. Darwin knocked in at least 80 runs for three straight years for the Twins, but he was also a free swinger, leading the American League in strikeouts three straight years, too.

After '74, Darwin's offensive performance declined. He became more of a part-time player, then ended his career with the Red Sox and Cubs in 1977. 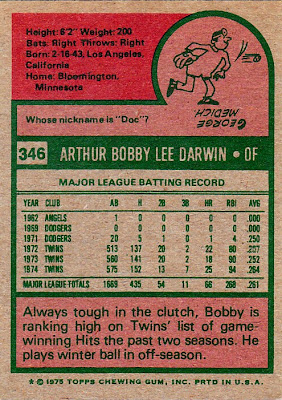 Back facts: We'll get to George "Doc" Medich's card eventually. ... Another arbitrary capitalization of the word "hits."

Other blog stuff: Continuing with the World Series theme of the last couple of days, on this date in 1988, the Dodgers won their most recent World Series title. Orel Hershiser pitched a four-hitter and was named MVP to become the fifth player to win the Series MVP and LCS MVP awards in the same season. I was never happier, baseball-wise, than on that day.
Posted by night owl at 1:43 AM

Bring on the Doc!

I like the World Series theme. Keept it up.

When I was a kid, I remember wondering how Darwin just sort of went away. He had some good numbers, but they were kind of empty.

David Ortiz was on a similar track, but was a lot younger than Darwin, and had PEDs...

Growing up in Minnesota, I remember Darwin well. He had a gangbuster spring training in 1972 and a very fast start in the regular season. He came at the right time because many of 60's mainstay twins were coming to the end of the road.
I eventually perceived him as the strikeout king...as a batter.

I keep forgeting that Darwin had this previous career as a pitcher and kind of bizzare one at that, actually appearing in the majors in a season so bad it him made change to be an outfielder.