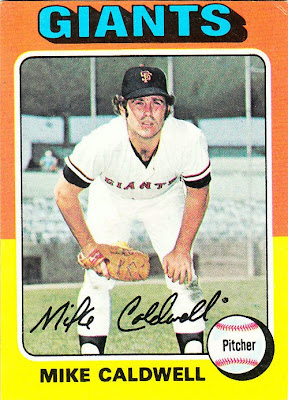 Card fact: This is the first time that Mike Caldwell makes an appearance on a card with his familiar mustache and  longish '70s hair. On his 1974 card, he is wearing an airbrushed Giants cap and is clean-shaven.

What I thought about this card then: Didn't see it. The first card of his I saw was his 1977 Topps card in which he is airbrushed into a Cardinals cap. That's notable because Caldwell was traded from the Cardinals to the Reds in March of 1977, probably before many collectors obtained their card of Caldwell as an airbrushed Cardinal.

What I think about this card now: If pitchers really looked in that intently for the catcher's signal, I think batters would be hesitant to get in the batter's box.

Other stuff: Caldwell began his career with the Padres, then was traded to the Giants in the deal that sent Willie McCovey to San Diego. A couple of years later he was on the move again, to the Cardinals, and then to the Reds. Cincinnati held on to Caldwell for just a couple of months before trading him to the Brewers for a couple of minor leaguers.

That trade was a steal for Milwaukee. The next year, 1978, Caldwell went 22-9 with a 2.36 ERA for the Brewers. He threw an astounding 23 complete games and was second to Ron Guidry in the A.L. Cy Young Award voting. From that point, he became a steady starter for the Brewers for seven years.

As a starter for the 1982 World Series team, Caldwell started Game 1 and Game 5 against the Cardinals and won both games. But St. Louis won the series. Caldwell pitched for the Brewers through 1985 before getting released. He's now a pitching coach in the Giants' organization. 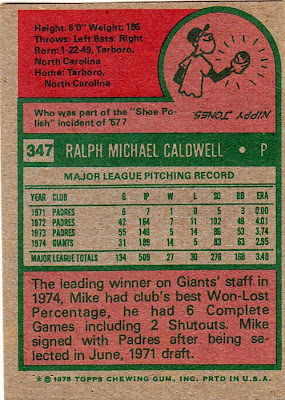 Back facts: The "Shoe Polish" incident, also known as the "Shoeshine Incident," was during Game 4 of the 1957 World Series between the Milwaukee Braves and New York Yankees. Jones, who played for Milwaukee, led off the 10th inning as a pinch-hitter. He jumped away from a low pitch that was called a ball. Jones argued that the ball hit him in the foot, pointed out shoe polish on the ball, and was awarded first base. The Braves went on to score three runs in the inning, win the game, tie the Series at 2 games apiece, and eventually win the Series.

As for the stats, 1974 was Caldwell's first decent year. You can see for his won-loss total from 1973 and 1974, he swapped the wins and losses. Now that's a turnaround season.

Other blog stuff: Former Dodgers shortstop and manager Bill Russell was born on this date. He is 62.
Posted by night owl at 1:09 AM

That 1978 season was something else. I remember watching that 1982 World Series, but it seems like it was so long ago. I'm getting old.

It also helps that he got away from San Diego!

His nickname, if I remember, on his APBA card was "Mr. Warmth". That was supposedly ironic.

I was about to make the same observation. I love those nicknames on the APBA cards.

Yet another example of a poorly written trivia question as there are multiple correct answers: the umpire, the pitcher, as well as the batter, the managers and possibly others were all "involved" in the shoe polish incident.