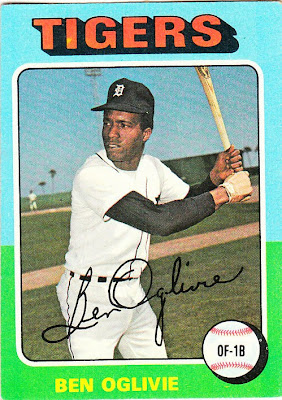 What I thought about this card then: I didn't see it. I didn't know about Oglivie until his days with the Brewers, even though he had been in the majors for seven years before even coming to Milwaukee.

What I think about this card now: I'm stuck on wondering how Oglivie's name was supposed to be pronounced. We pronounced it "Ogilvie," but there is no "i" between the "g" and the "l" in his name, so now I'm confused. I suppose its "O-gli-vee."

Other stuff: Oglivie was a powerful outfielder who came up first with the Red Sox. He wasn't able to get established with Boston and was traded to Detroit in 1973. After some pretty good seasons with the Tigers, he was traded to Milwaukee for Rich Folkers and Jim Slaton (Slaton ended up signing back with the Brewers a year later).

Oglivie blossomed with the hard-hitting Brewers. He became a member of "Harvey's Wallbangers" and his 1980 season, in which he slugged 41 homers and 118 RBIs and hit .304, was so far above anything that he had done before that it probably would have been credited to steroid use in today's cynical times. As it was, Oglivie tied Reggie Jackson for the league lead in homers and became the first non-American player to lead the league in home runs.

Oglivie finished his career with Milwaukee in 1986, then went to Japan to play. He is now a coach in the Tampa Bay Rays' organization. 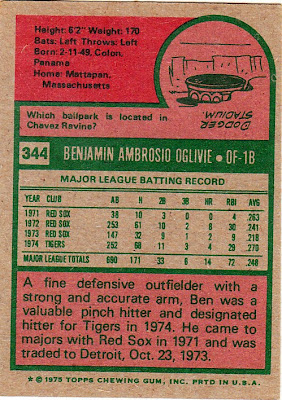 Back facts: I never get tired of cartoons that mention the Dodgers.

The write-up seems a tad odd to me. If Oglivie was such a good defensive outfielder, than how come he ended up a valuable pinch-hitter and designated hitter -- two job titles that don't require any defense?

Other blog stuff: This is an extraordinarily bad date in baseball history for the Dodgers -- Reggie Jackson's 3 home runs in Game 6 of the '77 World Series; Oakland's only win against the Dodgers in the 1988 World Series -- a bottom of the ninth blast by Mark McGwire; and an 11-0 pasting by the Phillies in Game 3 of the NLCS last year.
Posted by night owl at 2:08 AM

I had to come check immediately to see the comment about juicing.

I think that cardback write up was done by an (oxy)moron.

We need a blogger field trip to Dodger Stadium next season.

APBA game cards used to have the nicknames of the players. Ben's was "Banana Man."

Dodger Stadium looks like it's in the Grand Canyon when in fact it sits atop the flattened crest of a hill. Parking's already tough enough without having to ascend the cliffs on a burro.