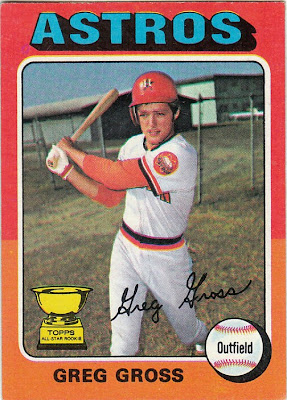 Card fact: This is the second straight card of a player with alliterative first and last names. Greg Gross follows Dick Drago. That's the first time that's happened in this set (and perhaps the last).

What I thought about this card then: Not in my field of vision in 1975.

What I think about this card now: I think the backgrounds on the Astros cards might be the most fascinating of them all. They're so bleak and weird. I still say that's a horse stable in the background. I like the '70s car parked in the distance, too.

Other stuff: Greg Gross enjoyed one of the finest rookies seasons in 1974. He finished third in the National League in batting average (.314) and second in the league in Rookie of the Year voting. The Astros kept Gross as their right fielder for the next two years. But Gross didn't do a lot besides hit singles, so he was traded to the Cubs for part-time infielder Julio Gonzalez.

A year later, Gross went to the Phillies in the deal that brought Manny Trillo to the Cubs. Gross couldn't break into the Phillies' talented outfield, so he settled for a backup role, and soon became one of the best pinch-hitters in baseball. Gross spent 10 seasons with Philadelphia as a part-time bat. He ended his career back with the Astros in 1989 and is among the top 5 in career pinch-hits in baseball history.

Gross then became a coach in the majors and minors, first with the Rockies, then with the Phillies. He is now the Phillies' batting coach. 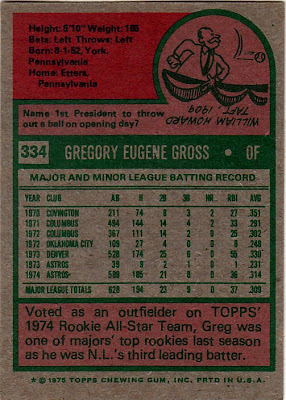 Back facts: I apologize for the scan with this card and the next card to follow. I was monkeying with the settings for a couple of cards, and I guess I thought it was OK. But obviously it's too dark.

Anyway, that's a nice characterization of William Howard Taft in the cartoon, although I don't think they made him appear as large as they did with the Babe Ruth drawings.

Other blog stuff: Another outfielder has been filled in on the Topps All-Rookie team:

That is one ugly uniform. I wouldn't be suprised to find out that was a big chicken coop in the background.

This was one of the first cards I laid eyes on. What a memory rush!

Interesting that the trivia question isn't really in the form of a question (Alex Trebek would be disappointed) but they tacked a question mark on the end of it anyway.

I must have picked up all the copies you didn't get in 1975 as I remember having more duplicates of Greg Gross and his teammate Cliff Johnson than any other card in the set when I collected as a kid.

Does anything say "singles hitter" better than this card? I remember being amazed that someone who looked not much older (or bigger) than myself at the time was playing baseball in the Majors.

This is a great example of the northwest area of the Astros Cocoa, FL spring training facility. The 2 story 'dorm' in the background was one of two that housed basically all the minor league invitees (or anyone that didn't speak English well enough to not want to live there). Pretty much everyone else had arraignments to live in local apts. The major stars on the team would live miles away in luxury apts. on Cocoa Beach. This 'chicken coop' was the minor league clubhouse for the invitees. It housed three sets of lockerrooms (for three minor league classes) and showers. I had fun cleaning shoes, and setting up lockers because I was a baseball fanatic as a kid and by the time I worked here this card was a few years old, so I already knew where I was. Good times....ugly place though.