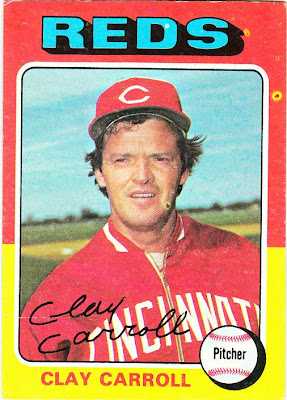 Card fact: I am semi-certain that the photo for this card and for Clay Carroll's 1976 Topps card were taken at the same time.

What I thought about this card then: Never saw it. However, I did think that Carroll and Tom Carroll, who appears later in this set and also played for the Reds, were brothers. It turns out they're not related at all. Funny what you learn after all these years.

What I think about this card now: I need to upgrade. Air bubbles all over this card.

Other stuff: Carroll pitched for five major league teams between 1964 and 1978, but he's mostly known for his eight years with the Reds. Carroll was a valuable reliever for the Big Red Machine. He led the National League in saves in 1972 with 37, which was a league record for 12 years, and finished fifth in the Cy Young Award voting.

Carroll continued to be a key reliever during the Reds' run, until Rawly Eastwick came along and the Reds traded Carroll to the White Sox. Carroll, who began his career with the Braves, played for the White Sox, Cardinals and Pirates to close out his career. 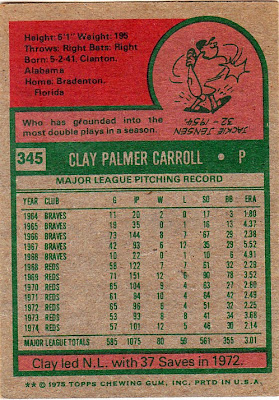 Back facts: Jim Rice now holds the record for most double plays in a season with 36 in 1984. In fact, out of the top 10 all-time in grounding into double plays, seven are Red Sox players.

Other blog stuff: Yesterday was a lousy day for the Dodgers in baseball history. Today is much better. On this date in 1981, Rick Monday hit a 9th-inning home run against Steve Rogers of the Expos to clinch the National League pennant. Also on this date in 1988, the Dodgers beat Dave Stewart of the A's to take a 3-1 lead in the World Series. In 1996, Raul Mondesi was named National League Rookie of the Year, the third straight year a Dodger had won the award.
Posted by night owl at 2:35 AM

Great color scheme. It's too bad that he led the league, but Topps couldn't put SAVES as a category on his card.

Air bubbles give a card character.

There may be no more dorkier photo than the mug shot on Carroll's 1969 Topps card.