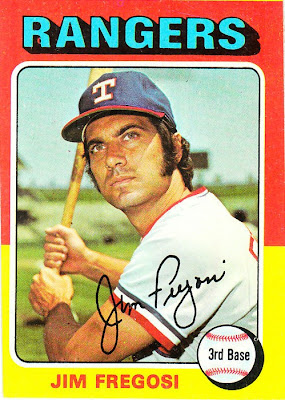 Card fact: You're looking at one of my brother's first favorite cards. It's among the first cards he ever owned, if not THE first, and it's the main reason why he and I liked the Rangers when we were youngsters.

What I thought about this card then: I associate it with my brother. There was a time when his favorite team was a tie between the Red Sox and the Rangers. That's long behind him, though.

What I think about this card now: The card had kind of mystical, hazy feel when I was a kid. I don't know how else to explain it. But looking at it as an adult, it seems like a boring old batting pose. All the mystery is gone.

Other stuff: Jim Fregosi started out as one of the first stars of the Los Angeles Angels. During the 1960s, Fregosi was a regular All-Star, winning five straight selections. His hitting was respectable for the time, although nothing great now. He hit for the cycle twice. He could also field and was the Angels' regular shortstop throughout the 1960s.

Fregosi then became the answer to a trivia question as the player who was traded to the Mets for Nolan Ryan in December 1971 (the Angels also received three other players). Fregosi was a bust, suffering through injuries during his time with the Mets, who allowed him to be purchased by the Rangers in the middle of the 1973 season. From there, Fregosi was a role player with Texas and then Pittsburgh.

Immediately upon his departure as a player in 1978, he found instant success as manager. He led the Angels to the American League West title in 1979. But he couldn't repeat that success, and his next few teams struggled. A stint with the White Sox yielded only a series of fifth-place finishes. But he made it to the World Series as the manager of the Phillies in 1993. He later briefly managed the Blue Jays and is now a scout for the Braves. 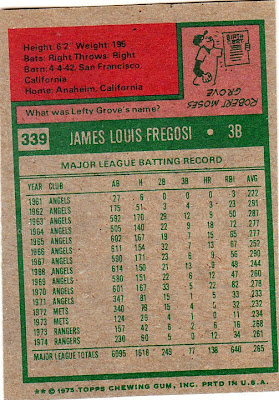 Back facts: I've had a heck of a time finding this card without crooked borders. Every time I look for an upgraded Fregosi card, the borders are off. I've upgraded enough times so the front of the card doesn't look terrible, but the back is WAY off.

Also, the cartoon question is a bit confusing: "What was Lefty Grove's name?" Well, I think you just mentioned it there, son.

Other blog stuff: You may have noticed I posted a Rangers card immediately after the Rangers clinched a spot in the ALCS. Did I do that on purpose? Nope. But it does give me an opportunity to say: GO RANGERS.

It's the only team left that I actually wanted to advance.
Posted by night owl at 2:47 AM

Is it a coincedence that you posted this right afte the Rangers clinched. No way. I know you've been planning this from the start of the blog. Speaking of which...
well, let's just wait a bit longer.