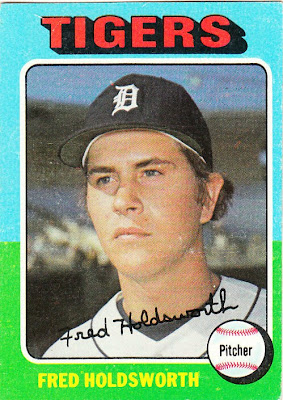 What I thought about this card then: The Holdsworth card was one of the cards my friend had. To me, those cards were very strange because I had never seen them before. I thought Holdsworth looked like a ghost. I was glad I didn't have this card.

What I think about this card now: I'm wondering why Topps even created a card of Holdsworth this year. He pitched in just eight games in 1974.

Other stuff: Holdsworth pitched seven years in the major leagues, but didn't get a lot of playing time in those years. The height of his activity was in 1977 when he split the year between the Expos and the Orioles, pitching in 26 games.

He was mostly a relief pitcher and finished with just a 7-10 record for his career (that's an average of one win every year). After his playing career ended in 1980, he became an accountant. 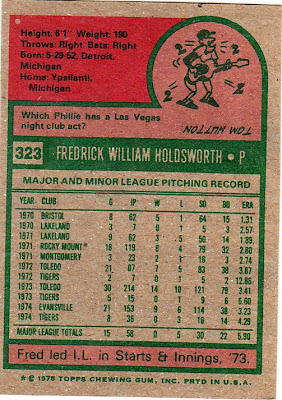 Back fact: Tommy Hutton had a Vegas act? I've heard him announce games for quite awhile. I don't remember him bringing that up.

Other blog stuff: The light blue-green color combo (the "day baseball" color combo) is dead last in the standings. This is just the 12th card with that color combination, and it's been 83 cards since the last "day baseball" card.
Posted by night owl at 2:36 AM

It's interesting that Holdsworth managed to stay on the fringes of the major leagues for so long, without actually seeing much playing time at the major league level. Between '72 and '80, the only season he played excusively in the majors was '77, but there were only two seasons in that stretch where he didn't play in the majors at all. Ironically, 1975 was one of them.

It is kind of odd that Topps gave him a card in '75. Maybe they were short on Tigers players due to guys who retired or had been released. I was thinking that the other year Holdsworth got a card must have been '78, after having spent the entire '77 season in the majors, but it wasn't. The other year he got a card was '77.

I know that's a letdown after a great comment by MCT, but it's late.

I met Fred Holdsworth in the mid-1970s at the Win Schulers Restaurant (near Ann Arbor, I believe), while working there between seasons (him, not me!), and he was kind enough to sign an autograph for me. I just bought his 1975 Topps card #323 on Amazon ($.49), to accompany it in my very modest sports memorabilia collection. :)