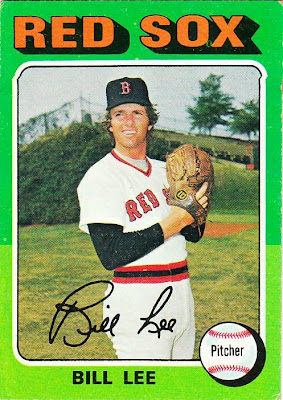 Card fact: This is a card of one of three players in major league history named Bill Lee.

What I thought about this card then: My brother had the mini card. I thought Lee looked like a stately, reserved gentleman in this photo. Boy was I wrong.

What I think about this card now: There's a lot of green on that card, both on the border and in the photo.

Other stuff: Lee's career has been well-documented because he's a media dream. He's articulate. He says wild stuff. He speaks in a humorous way. I have enjoyed him ever since he called his manager, Don Zimmer, a gerbil. I thought it was the most appropriate, hysterical characterization of someone ever. I still think it's funny.

The man who once claimed that smoking marijuana made him resistant to bus fumes while jogging to the ballpark, actually was and is a baseball traditionalist who has a great appreciation for the game to this day. A reporter at my newspaper once interviewed him for a story, and I kicked myself that I didn't get the opportunity to do it myself. 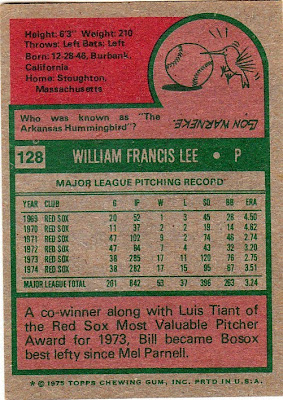 Back facts: Hey, what do you know? He's a lefty.

Lee's best seasons were the two most recent you see on this card and his 1975 season. In 1976, he was injured in a brawl with the Yankees (the one in which Lou Piniella barreled into Carlton Fisk at home plate) and lost a lot of time.

Over thirty years after Lee made that comment and "Gerbil" is still the first thing that pops into my head when seeing Zimmer on TV.

When I saw this pop up on the blogroll this weekend, it said "It's far out man" right above his card and I thought that was appropriate.

In my 47 years I only got three autographs. I met William at the Danbury Fair Mall and had fun conversation about shoveling chicken poop for a living lol. Cheers what a blog you have!