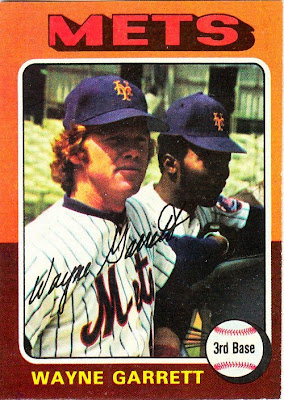 Card fact: The first card, I believe, in which a second player is featured prominently in the photo. I think that is John Milner. If I am correct, then Milner is stalking Garrett, because he also shows up in Garrett's 1976 Topps card.

What I thought about this card then: Finally, a card I saw back in 1975. My friend had this card because he hoarded Mets and Yankees. I thought any card in which the player was not posed was cool. So this card was dy-no-mite.

What I think about this card now: Did Topps pick this particular combination to match Garrett's red hair?

Other stuff: Young Mets and Yankees fans have this incredible ability to make their favorite players sound better than they are. I don't know why that is, but Garrett is an example of one of those guys who I thought was great because the many New York fans who surrounded me said so. It turns out he couldn't even hit .240 for his career. He also was The Blob of the 1973 World Series. 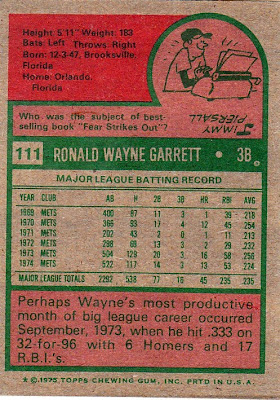 Back facts: Another "perhaps" in the write-up. The Topps guys didn't like to do research did they?

Other blog stuff: Pop history lesson: on this date in 1975, the Warren Beatty/Goldie Hawn movie "Shampoo" was released. It was the fourth biggest movie of that year.
Posted by night owl at 3:36 AM

That is a nice looking card all around. I always love the additional players in the backdrop.

I think young fans in general have the tendency to make their team's players better than they are. Heck, I'm nearly 40 and I do it with Rangers players every year.

September 1973, of course, was when the Mets mounted the stretch run that brought them an improbable NL East championship.
If you had to pick a month in which to get hot, that's a pretty good one.