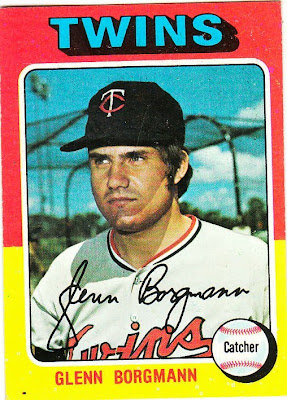 Card fact: The 1975 card is already Borgmann's third card of his career. His college reputation apparently preceded him because 1974 was his first full season.

What I thought about this card then: I would have been highly entertained by his name if I had the card. But I didn't.

What I think about this card now: I guess that's what you call a "baby face." Borgmann was known as the "Baby Bull" in college.

Other stuff: Borgmann was called "the Johnny Bench of college baseball" when he played at Miami-Dade. Scouts expected big things of him. Borgmann started a couple of years behind the plate for the Twins, but he's mostly known now as the guy who lost his starting job to a 20-year-old, Butch Wynegar. 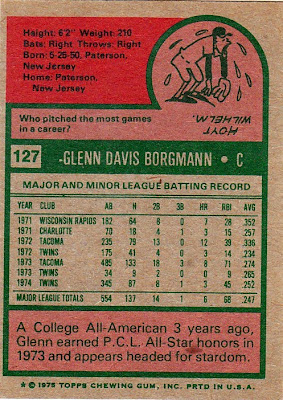 Back facts: Baseball-reference says Borgmann's middle name is "Dennis," not "Davis." I'm really hoping it's Dennis, because that would mean Borgmann would have double Ns in his first, middle and last names. Besides, there already was a Glenn Davis in baseball.

Also, you'll note the promise that Borgmann held. Not a lot of card write-ups say someone is "headed for stardom" before they show absolute signs of doing so. And we know that Borgmann never reached stardom.

It's too bad that "headed to stardom" part didn't work out for Glenn. He looks like a catcher.

2 of the last 5 cards are players from Patterson, New Jersey: Borgmann & Johnny Briggs. And one of those five cards is a check list. It's possible that if Glenn Davis is really his first and middle names, he might have been named after the famous Heisman Trophy winner of the late 40's, Glenn Davis of Army. The time period fits when he was born (1950), if his father was a fan of West Point.