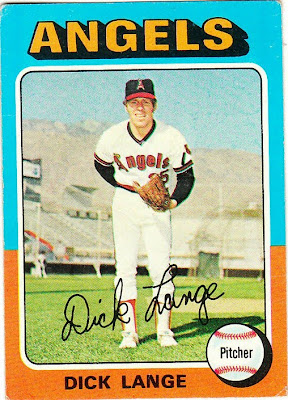 Card fact: This is the middle card in Dick Lange's card trilogy. He debuted in the 1974 Topps set and closed in the 1976 Topps set. His entire career encapsulated in three tidy cards.

What I thought about this card then: I had the mini card -- I had a lot of Angels mini cards for some reason -- and I wondered why Lange's photo was taken from so far away.

What I think about this card now: The same thing I thought about then. Why so far away? He wasn't a tall guy -- just 5-foot-10. The thing that make it even more puzzling to me, is he is posed in a similar fashion on his 1976 card and positioned just as far away -- except on the '76 card he's wearing longer hair and a mustache.

The mountains in the background are a nice touch. I like those Catcus League shots. I've never been anywhere near Arizona so it seems rather exotic to me.

Other stuff: There is precious little to be found about Lange. He stood out in the minor leagues, but couldn't stick in the big leagues. His 1974 season was his best, but the Angels were lousy then and his record wasn't great. He was done with the majors at 28 years old. 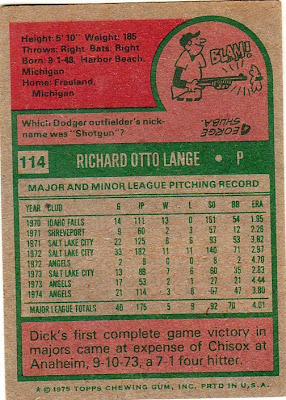 Back facts: Hey! A cartoon about a Dodger! That always fills me with pride. ... Also, there are a lot of enjoyable middle names in the 1975 set. Otto is one of them.

Other blog stuff: Damaso Marte, the former White Sox reliever, was born on this date in 1975. It is also my brother's birthday.
Posted by night owl at 3:15 AM

Happy belated birthday to your brother. Lange may have had a brief career, but he's got that complete game four-hitter to look back on. Also, that is a remarkably non-tilty background for '75.

It looks like Tempe Diablo Stadium. Nice spring training park. I thought the Angels were training in Palm Springs in the mid 70s. They must have played some games in Tempe.