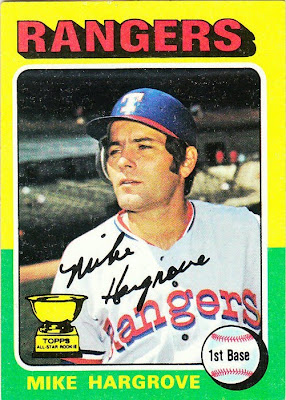 What I thought about this card then: Not part of my collection. Hargrove's 1976 Topps card was one of my favorites. It's a very simple card -- a picture of Hargrove pointing his bat at the camera, a familiar pose on many 1970s cards. But something about it grabbed me. In fact, I liked Hargrove's cards in the '77, '78 and '79 sets, too.

What I think about this card now: If they had just moved Hargrove's card number up one place, Topps could have had back-to-back rookie cup cards. I wonder if that has ever happened in any Topps set?

Other stuff: Hargrove is one of those guys who had both a long and successful playing and managing career. When you go through baseball history, there really aren't a ton of folks who succeeded for so long in both areas.

Hargrove was nicknamed the "Human Rain Delay" for all of his maneuverings before he got into the batter's box.

He quit as manager of the Mariners in midseason in 2007, even though the team was playing well at the time. He now manages a semiprofessional baseball team in Kansas. 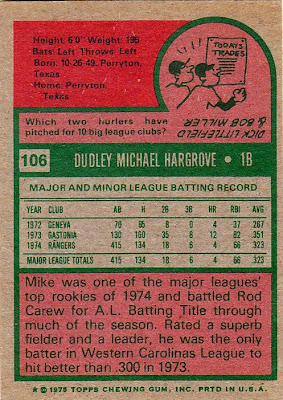 Back facts: Hargrove won the American League Rookie of the Year award in 1974, clobbering runner-up Bucky Dent with 67 percent of the vote, compared to Dent's 12. George Brett finished third.

Other blog stuff: Just two days after adding the third baseman to the Topps rookie team, it's time to add a guy at the other infield corner:

That's a Ranger for the wantlist.

Dudley must have been a family name.