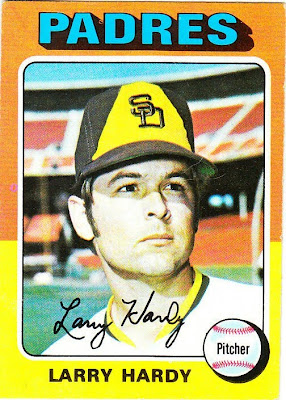 Card fact: This is the first and only Topps card of Larry Hardy.

What I thought about this card then: I distinctly remember pulling this card out of a pack while I was on vacation with my parents in 1975. Hardy, even though he was 24 years old when this photo was taken, struck me as being about 45. Hey, I was only 9. Everyone looked old to me.

What I think about this card now: It takes a real man to wear what the Padres players wore in the 1970s. That cap looks nothing more than embarrassing, yet Hardy doesn't appear to be fazed at all.

Other stuff: Even though Hardy made a significant showing as a rookie, pitching in more games than any other rookie in history, he was done in the majors by 1976. He started coaching in 1978, and  was a member of the Rangers' coaching staff in the late 1990s. 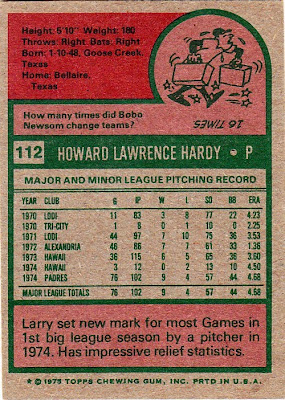 Back facts: Even as a kid, I thought that Hawaii was a pretty exotic location for a minor league team.

The record for most games pitched by a rookie is now held by Sean Runyon of the Tigers, who appeared in 88 games in 1998.

Other blog stuff: There are a number of players in this set that were born on Feb. 12: Pat Dobson, Don Wilson, Ray Corbin, Len Randle, Enzo Hernandez and Don Stanhouse.
Posted by night owl at 12:30 AM

I was going to mention the Ranger connection, but you beat me to it. Poor Bobo Newsom sure moved around a lot.