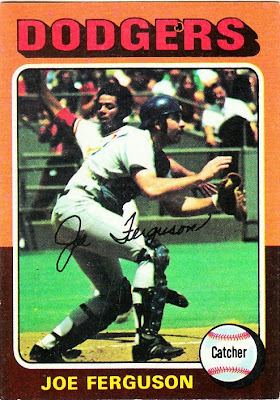 Card fact: This is the second straight year in which another player is featured prominently in the photo on Joe Ferguson's card. In his 1974 card, a Phillie is bending down in the foreground. I don't know who it is. With this card, I'm relatively sure that is Bake McBride sliding into home.

What I thought about this card then: Sadly, I did not see it. Later, when I was a teenager trying to get all the Dodgers from this year, this was probably my favorite card out of all the '75 Dodgers that I acquired.

What I think about this card now: If that actually is Bake McBride in the photo, than this picture appears to be from a game on May 27, 1974 in St. Louis. The Cardinals won 7-2. McBride scored twice. But in the second inning, he doubled off Andy Messersmith. The next batter, Ted Sizemore, doubled and there was a throw home to try to catch McBride at plate. McBride scored and Sizemore advanced to second on the throw.

Other stuff: When I was a kid, I wanted the Dodgers to ditch Steve Yeager and make Joe Ferguson their full-time catcher. When you look at Ferguson's hitting stats, they aren't great. But they're a little better than Yeager's. And when I was watching the Dodgers in the late '70s, Yeager seemed useless at the plate. An automatic out. Ferguson at least seemed to get on base once in awhile. 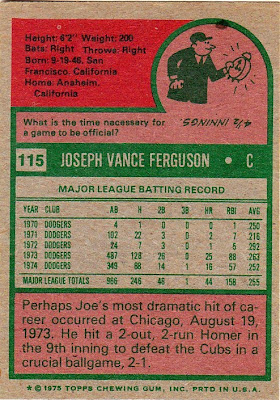 Back facts: Yet another "perhaps" to lead-off the write-up. And I'd like to know a little more about the ballgame before I accept that a game against the Cubs in August is crucial. The Dodgers didn't win any pennant in 1973, so don't tell me a win against one of the worst teams of the '70s was crucial.

Other blog stuff: Four of the Dodger cards shown so far feature orange and brown borders. None feature blue. I'm still not over that.
Posted by night owl at 2:30 AM

If you're 10 games out, that August game may not be crucial. What kills me is when a guy will say in April or May, "It's only one game" and then in September they'll say, "If we had just won another game here and there, we'd be in the race". Until you're out of it, they're all important. Even the ones in April and May. I love the play at the plate by the way.