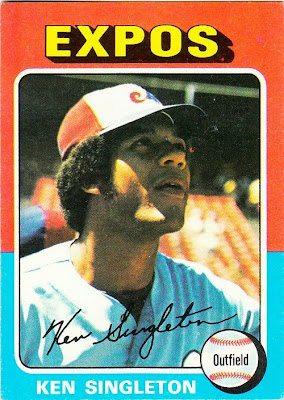 Card fact: It's not really a card fact, or even a player fact. It's more of a personal family anecdote. Ken Singleton is the favorite player of my youngest brother.

What I thought about this card then: I didn't see. It was a long time before I knew that Ken Singleton played for any team other than the Orioles.

What I think about this card now: What is Singleton looking at? Is someone threatening to jump from the top deck?

Other than that, the border goes very well with the Expos uniform.

Other stuff: Ken Singleton was a very consistent, durable player his entire career. He had a heck of a season in 1979, finishing second in the American League MVP voting to his former teammate, Don Baylor. I have a feeling Singleton's '79 season played a part in my brother picking him as his favorite player as my brother would have been 9 that year.

Singleton went into broadcasting after his career was over and I vividly remember he and Duke Snider calling games for the Montreal Expos (we could get the Montreal channel in Buffalo). He has been a Yankees broadcaster for a long time. He is pretty much the voice of reason in the insane asylum called YES, which broadcasts most Yankees games. Personally, I don't know how he stands it. 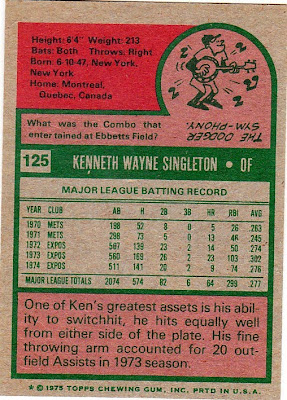 Back facts: I need to start counting the cartoon references to the Dodgers. There's been several of them. ... Also, I like the random capitalization of "assists" in the write-up.

Other blog stuff: I'll go with a birthday since I just alluded to annoying YES broadcasters. Paul O'Neill was born on this date in 1963.
Posted by night owl at 12:35 AM

I'm sure the excellenct color combo matching the expos colors was a complete oversight. He had a pretty solid year in '73. I always remember him as an Oriole too.

And my brother was born on this date in 1964. Hey if you can share family info, then so can your readers :D

Second straight New York area guy (after Johnny Briggs), Singleton was from Whit Plains, I think. Or maybe Mount Vernon. Somewhere in Westchester. I remember when he originally came up with the Mets. I thought, "Finally, the Mets come up with a hitter". Up till then the Mets farm system had produced a bunch of good pitchers, but hitters? Ron Swoboda? Bud Harrelson? Singleton looked like a real Major League hitter, so of course they traded him.