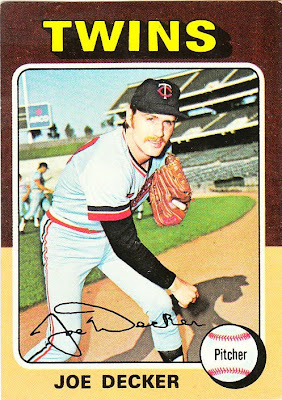 Card fact: The last two cards have featured the same-colored border. That's the second time that has happened (first was Willie Davis-Bill Melton), except for the highlights series at the start of the set.

What I thought about this card then: I had the mini card. I associate this card with my brother, because it was one of the first cards he had from the set.

What I think about this card now: The shadow Decker is casting looks like the head of a Scottish terrier.

Other stuff: Decker pitched for the Cubs, Twins and briefly with the Mariners. His 1974 season was his best season as he won 16 games. He would never win more than two games in a season the rest of his career, which ended in 1979. 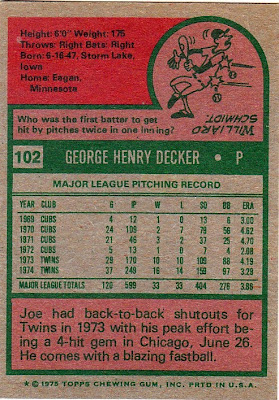 Back facts: I'm not sure, but this could be the only card in the set for which I have the regular base card, the mini card and the OPC card. The front of the OPC card looks just like the Topps card. (Actually, after a bit of thinking, I do have all three for Doug Rau, as well). 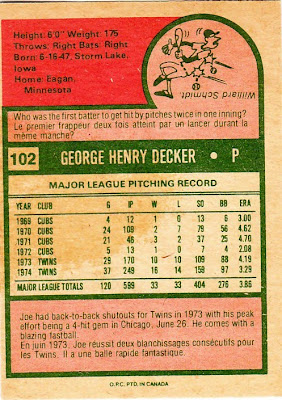 The card apparently encountered some turbulence crossing the border. It's a bit messed up. But you can see all the French words crammed into the back of the card.

Other blog stuff: After much consideration I have indeed settled on a name for this color combo. I am staying with the food concept, but it's not any of the fine suggestions offered. It's very simple: "The chocolate & vanilla combo." I like that.
Posted by night owl at 2:52 AM

It's amazing anyone could stand up at all in 1974, what with the tilting planet and all. I like the vanilla and chocolate combo, like a swirl ice cream cone. RIP Mr. Decker.