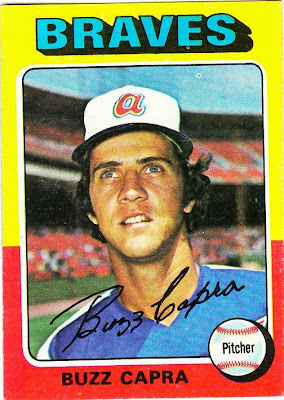 What I thought about this card then: Didn't see it. The first card of Capra's that I saw was his 1976 Topps card. That is the case for a number of cards, probably because I bought twice the number of cards in '76 that I did in '75.

What I think about this card now: Capra looks a tad excited in this photo. The close-up view is a bit alarming.

Other stuff: Capra featured one of the best nicknames in baseball (his real name is Lee), and is one of those famous one-year-wonder pitchers that baseball historians seem to love so much. Capra's best year, by a million miles, was 1974 when he went 16-8 for the Braves -- his first year for Atlanta -- and won the National League ERA title. He was Pitcher of the Month in June of 1974, made the All-Star team, and was part of a memorable year in Atlanta, which also included a home run hit by some dude named Hank.

Capra got hurt the following year and never won more than six games in a season for the rest of his career, which was done in 1978. 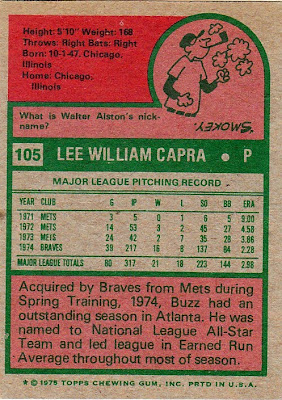 Back facts: Capra was purchased from the Mets, who didn't have room for the player on their vaunted pitching staff.

Other blog stuff: Speaking of Hank Aaron, today is his 76th birthday. Only 555 more cards until we get to yours, Hank.
Posted by night owl at 2:12 AM

Buzz Capra...sounds like a mob name. At least he always has that 16-8 season to hold on too..plus the ERA title. Happy Birthday Hank!

you realize that Hank will have had another birthday long before we get to his card, right?

Not if I pick up the pace, Captain.

I should get to Mr. Aaron in the 1976 blog before his next birthday.