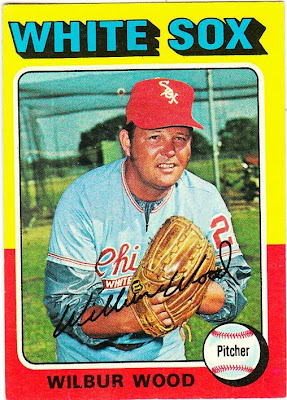 Card fact: I always thought having the initials "W.W." would be cool. Wilbur Wood is one of 31 people to make the major leagues with those initials. Other notables were Walt Weiss, Willie Wilson, Wally Whitehurst and Whit Wyatt. (Yes, I really did just look that up).

What I thought about this card then: Never saw it. This is quite a streak of cards here that I didn't see as a kid. But that streak is about to end.

What I think about this card now: Whenever I see a '70s card of a player wearing a warm-up jacket under his uniform, I notice it immediately. But when I was young, I never noticed it.

Other stuff: Wood was one of the most successful knuckleball pitchers in history and was noted for his durability. He suffered a career-shortening injury when he was struck on the knee by a line drive by the Tigers' Ron LeFlore and retired in 1978. 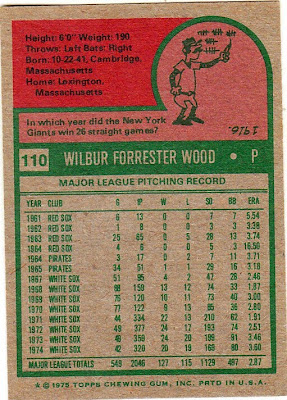 Other blog stuff: I was once considering calling this the "primary colors" color combination, but I ended up using that with the red-blue color combo. I'm thinking of just calling this the ketchup-and-mustard combo. The food references seem to work for me.
Posted by night owl at 12:55 AM

Wood is the last pitcher to start both games of a doubleheader.

I have this well worn card STILL in my wallet!!

If LeFlore didn't hit that line drive into Wood's knee, I think he'd still be pitching for the White Sox.

There is a great story about Wilbur Wood in one of roger Angel's books. Angel said that Wood was a fantastic interview. After every outing he would grab a cigar and a six pack and sit in the dugout and talk to reporters. He would answer every question they had. When the beer and cigar were gone...that was it. Gotta go.

Seeing yet another warmup jacket under a jersey just jogged my memory. My stepfather was into distance running in the mid to late 70's and he would run with a windshirt like that under a t shirt sometimes when it was rainy or cold. I guess it was 'a thing' back then.