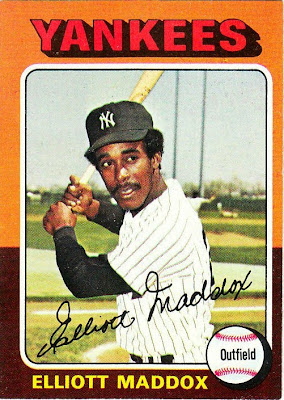 Card fact: Elliott Maddox is the only player in major league history with the first name of Elliott. Tampa Bay's Elliot Johnson has come the closest to matching Maddox's feat, but he came up one "T" short.

What I thought about this card then: This is the first Yankees card I ever saw. That's big when you live in Yankee country.

What I think about this card now: The photo always seemed like a painting to me. That makes me suspect that it is airbrushed. But it doesn't appear to be. Maddox was acquired by the Yankees from the Rangers in spring training of 1974, so Topps had plenty of time to take a photo of him with his current team. The pinstripes look legit.

Other stuff: Maddox was a fine defensive player who could hit on occasion. He's kind of known for suing the Yankees after slipping on the field at Shea Stadium (the Yankees played at Shea then) and hurting his knee. Maddox didn't win the suit. 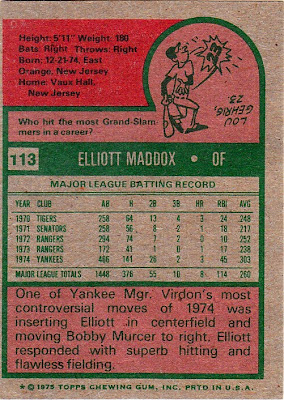 Back facts: Here is an example of when a cartoon is educational. I have known about Lou Gehrig's career grand slam record since I knew about baseball. Aside from Hank Aaron's career home run mark, it might be the record I've known about the longest. And it's all because of this cartoon.

Also, I enjoy the write-up. Controversy! Mentioning controversy on the back of a baseball card was rare back then.

Other blog stuff: Hell, it's the weekend. I'm done thinking.
Posted by night owl at 3:30 AM

So...the first Yankee card you ever saw turns out to be a guy who SUES the Yankees. There's some sort of poetic justice there, even if he didn't win the suit.

I learned a lot from those 1975 cartoons. Another source of good information was the subsets like all-time record holders (1973), MVP cards (1975), and Turn Back the Clock (1977). I learned about the Gehrig grand slam record from the 1973 card.