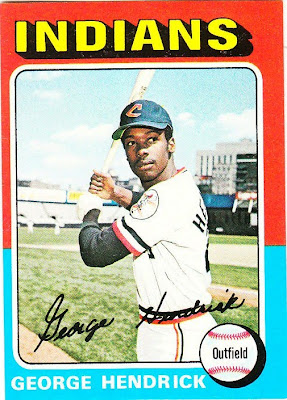 Card fact: it's been awhile since we've had a color combo match a team's colors. The red/blue combo goes nicely with the Indians' ensemble.

What I thought about this card then: Wasn't aware of it. The first Hendrick I saw was the '76 Topps card in which he's wearing that awesome Indians visor. It was so awesome that he brought it back out for his '77 Topps card.

What I think about this card now: Hendrick was one my favorites growing up, so any of his cards are automatically cool.

Other stuff: Hendrick was always there when I was growing up. His career began a couple years before I started following baseball and he was still there until I graduated from college. I remember his straight-up batting style, and he was one of the reasons I rooted for the Cardinals to win the World Series in 1982.

St. Louis swindled San Diego by trading Eric Rasmussen for Hendrick in 1978. Then the Cardinals obtained John Tudor for Hendrick before the 1985 season. St. Louis sure was smart back then.

Also, Hendrick supposedly is the player who started the trend of wearing uniform pants down to his ankles. OK, maybe I don't like him so much anymore. 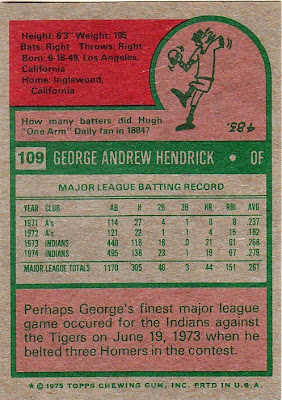 Back facts: The cartoon is fascinating isn't it? Daily has a very interesting wikipedia page. He has all the ingredients of a bigger-than-life figure. A surly personality, a few standout years followed by a sharp decline, and a mysterious postcareer.

As for Hendrick's write-up: "Perhaps George's finest major league game occurred ... when he belted three homers in the contest." Perhaps? Hendrick had been around for only four years. Was he in the habit of hitting three or more homers a game regularly?

Other blog stuff: The No. 1 song on this date in 1975 was "Fire," by the Ohio Players. One of the first songs to employ fire engine sound effects. Perhaps the only one.
Posted by night owl at 3:10 AM

Perhaps that was his best game ever?? HMM?? Nice cartoon this time. A little weird, but eye-catching.