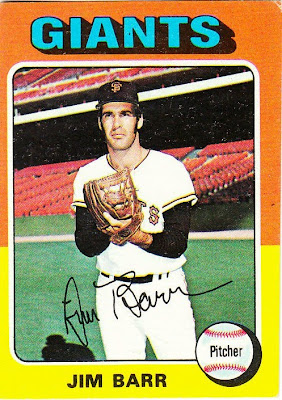 Card fact: Not much to say. How about this: this is the first card featuring the orange-yellow color combo that is not either a team card or a White Sox player. That's reaching, but that's all I've got.

What I thought about this card then: Don't remember it. However, the 1976 Topps card was deemed the favorite card of one the various animal characters (it was a bear) that were in my room. Yes, the bear had a name. Yes, I wrote the name of the bear on the card. Yes, I still have the card. No, you're not going to see it.

What I think about this card now: Look at the stands. That is approximately how many people that I think should turn out for Giants games.

Other stuff: Jim Barr, with the exception of two seasons with the Angels, was a career Giant, which meant that I didn't care for him much. But he had a career losing record, which was always fun.

Barr's name came up during the 2009 season when Mark Buehrle broke Barr's record for most consecutive batters retired. Buehrle retired 45, which included a perfect game thrown against Tampa Bay. Barr didn't throw a no-hitter/perfect game when he set the record of 41 straight in 1972. Instead he was perfect from the third inning on in one start, and perfect until the 7th inning in his next start. 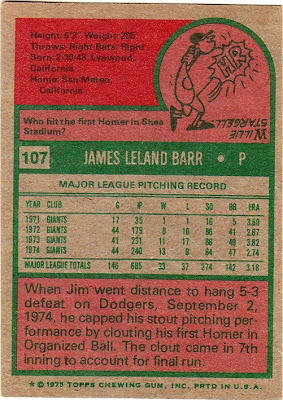 Back facts: My goal is to feature one of these players on his birthday. Barr has come the closest so far, as his birthday is Wednesday.

Also, I'm not too pleased about the write-up. I'm glad I wasn't watching baseball during that bit of ugliness.

Other blog stuff: It's official. I'm calling the orange-yellow combo the "Oscar Mayer weiner combo" as it resembles the hot dog maker's packaging and famous mobile.
Posted by night owl at 2:02 AM

The stands probably looked like that during a lot of Giants games in the mid 70s. It was a tough time for them.

That's about as "meh" as you can get.