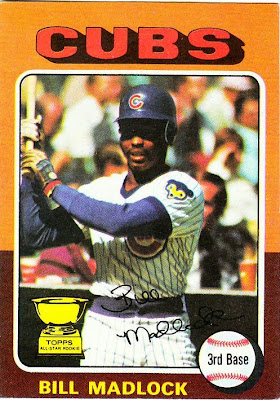 Card fact: This is Madlock's first solo card. He appeared in the 1974 Topps set on a "Rookie Infielders" card with three other players who barely made a dent in the majors. Interestingly, that card was No. 600 in the set, a number traditionally reserved for the best players of the day.

What I thought about this card then: The first Madlock card I saw was his 1976 card. Like many of the third basemen of the time, he had a fan in me. I really liked third basemen for some reason, which is probably why my favorite player ever is Ron Cey.

What I think about this card now: It's not a great photo with half of Madlock's face in the shadows. But as a kid I would have loved it since the photo was taken during a game.

Other stuff: Bill Madlock enjoyed a reputation as one of the best-hitting third basemen to ever play the game. Wade Boggs ended up overshadowing "Mad Dog" in that department, but Madlock's career is nothing to ignore. I was a big fan of him when he was a Pirate. Prior to that, I was crushed when he was dealt from the Cubs to the Giants. I hated his 1978 card, seeing him in a Giants uniform. Fortunately, the Giants got rid of him awfully quick and I could like him again.

Madlock played for the Dodgers at the tail end of his career. He had a heck of an NLCS against the Cardinals in 1985, hitting three homers in the series. 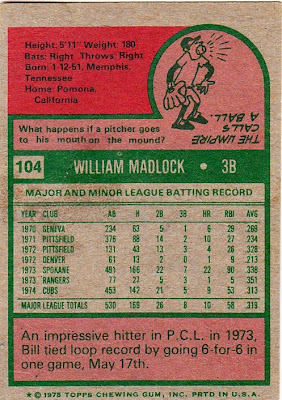 Back facts: Another player without a middle name. ... Baseball lingo like "loop" threw me as a kid. I don't know how many times I came across "loop" before I knew it meant "league." Baseball was sometimes a mysterious world for a youngster.

Other blog stuff: It has been a long time since there has been a card featuring a rookie cup. We won't have nearly as long a wait until the next one. But it's time to update the team:

A nice-looking team already.
Posted by night owl at 2:33 AM

Wow, I forgot Madlock used to be thin! LOL

I hated Madlock for the take out slide on Tony Fernandez in 1987. As it turned out, Fernandez broke his elbow on a bad seam in the turf where some wood was poking through, or something like that.
That was the real reason the Jays lost in 87.