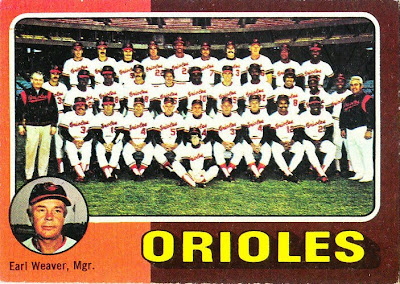 What I thought about this card then: If I was aware of it, I don't remember it. Such is the life of a team card.

What I think about this card now: Well, I'm happy to finally have it in my possession as it was a source of a small amount of consternation back when I was collecting the set five or six years ago.

Other stuff: Earl Weaver was a very entertaining guy, even though I didn't root for him that much. Broadcasters loved talking about him. I miss the days when Weaver and Billy Martin were in their managing prime. Nobody argues like those two guys did.

This is a bit morbid to say, but I'm always surprised that Weaver is still around. He seemed old to me for most of his managing career, and when he was elected to the Hall of Fame, I was a bit shocked that, you know, he was still ticking. But he's 79 years old, and when I was watching him manage, he was in his late 40s and 50s. Like Sparky Anderson, it must've been the white hair that was throwing me off. 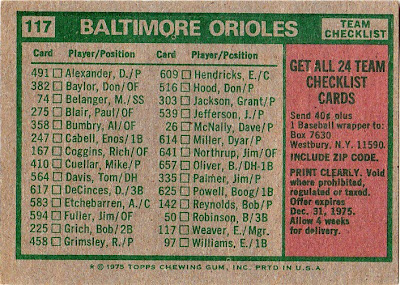 Other blog stuff: Let's see how well Topps did representing the Orioles' team of 1974.

As a veteran team, the Orioles didn't use a lot of players in '74. Thirty-two players suited up in orange and black. Topps produced cards of 25 of those players. That's a percentage of 78.1, which is the second-best percentage so far.

The only semi-notable player missing from the Orioles' 75 team set is Wayne Garland. He pitched in 20 games for the Orioles in 1974, going 5-5. Don Hood pitched in the same number of games, but in 35 fewer innings than Garland and got a card.

Here is where the Orioles stack up with the other team cards reviewed:

That comment about Hood and Garland makes me wonder how many guys got maybe one chance in the big leagues, played in some games, and NEVER got on a card.

In my quest for all-times Orioles autos, I have come across a number of guys with 10 or less MLB games played. Luckily for my purposes, the Orioles teamed up with Coke/Crown to produce an all-time team set in 1991 so all of those early year guys are covered by that, including those who only made it in 1 game.