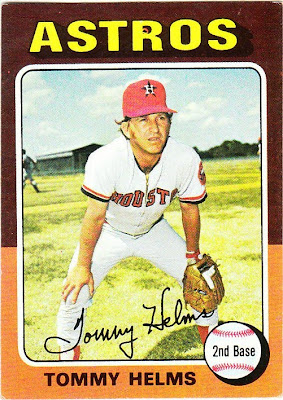 Card fact: Tommy Helms is in an identical pose on his 1974 Topps card. It's possible that both photos were taken at the same time.

What I thought about this card then: Tommy and I never ran into each other.

What I think about this card now: It must be lonely attempting to field ground balls out on the prairie, or wherever Helms happens to be in this photo.

Other stuff: Helms was the 1966 National League Rookie of the Year with the Reds, and made the All-Star Game a couple of times in the late 1960s. Then, in 1971, he was sent to the Astros in a blockbuster deal that basically transformed the Reds into the Big Red Machine. The Reds obtain Joe Morgan, Cesar Geronimo, Jack Billingham and Ed Armbrister in that deal.

Helms, who briefly managed the Reds during Pete Rose's gambling episode in 1989, is the uncle of Florida Marlins third baseman Wes Helms. 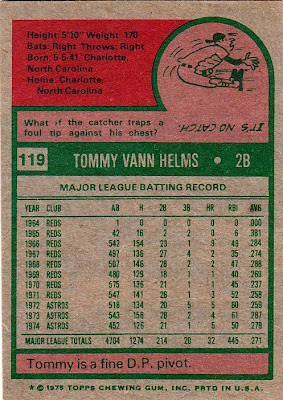 Back facts: How cool is "Vann" for a middle name? I wish my middle name was "Vann."

Other blog stuff: I've yet to come up with a name for this color combination. But I looked over the suggestions for the red-yellow combination a couple of posts ago, and I like Johngy's suggestion of "strawberry cheesecake." It fits and that's what I'm going with. Plus, I have loved cheesecake since I was very little. You can't go wrong with cheesecake. You just can't.
Posted by night owl at 2:52 AM

Awesome. Score one for Johngy. I am honored.
And no, you can't go wrong with cheesecake.

For some reason, I think of Burger King when I see this brown-yellow-orange combo.

I always hated cheesecake...because I wouldn't try it. When I tried it, I kicked myself for all those wasted years. I wonder who the pitcher was on that cartoon. Nice pitch.

Similar to 1974, but the shadows look different and the sleeves are definitely different.

Yeah, cheesecake's cool, even if it's not traditional ballpark fare.

The barren background in this one is quite similar to the background on the card of Helms' Houston teammate Doug Rader.

Almost makes you think the Astros did a Bear Bryant and held their preseason training in 110-degree weather on some godforsaken Texas prairie.

This picture, as a lot of the Astros '75 card pictures were taken at their Cocoa, Florida Spring Training facility. And yes, its ughhhly, But it was a lot of fun to hang out, as a kid...