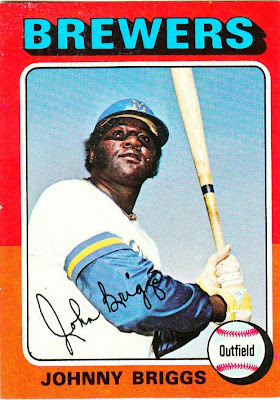 Card fact: Here we have an example of the "hero shot," in which a player's photo is taken from below so the player appears to be some sort of giant. The first example of this in the 1975 set was with the Nolan Ryan highlights card. I haven't researched enough to see if there are other examples.

What I thought about this card then: This is one of the earliest cards I received back in 1975. It didn't come in my first packs. I think it might have come in a trade. I just know I've known about this card for a LONG time.

What I think about this card now: Those are some kind of sideburns.

Other stuff: Briggs wasn't a star, but he did manage to hit 139 home runs in his career. Yet, I'm pretty sure the vast majority of baseball fans have never heard of him. Briggs played for 12 seasons and also spent a year in Japan. 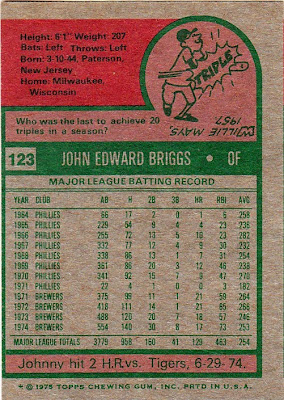 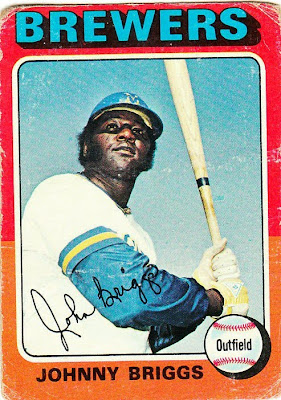 Oldie but goodie: Here is the card that I first clutched as a 9-year-old. Again, I'm shocked that it is in as good of shape as it is.

Other blog stuff: Players in this set who are celebrating birthdays today are Ken Boswell (1946) and Ron Hunt (1941).
Posted by night owl at 3:17 AM

Begging his forgiveness, I had never heard of Mr. Briggs until now. He looks like one bad dude.

In 1975 I was convinced Johnny Briggs was a superstar, based on this card. I never knew why. It must be the "hero card" thing.

I’m a little older, but remember Johnny Briggs very well. He was a very highly touted young prospect with the Phillies and turned out to be a good player, though not as good as originally projected. What I Remember most about Briggs was that when the Phillies played the Mets, or, later, when the Brewers played the Yankees, it was always, at least once a game, pointed out that Briggs was a “local boy”, from Patterson, New Jersey. When I was a kid I thought his real name was "Johnny Briggs from Patterson, New Jersey".