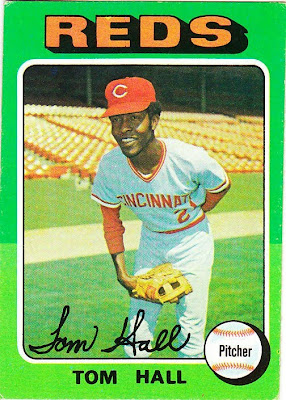 Card fact: I don't have a fact. But Hall shares the name of the father of my best friend when I was growing up. Had I known who Tom Hall was when I was a kid, this would be the source of endless amusement.

What I thought about this card then: Never saw a single one of Tom Hall's cards. He was one of those players who disappeared just as I was getting to know baseball, and I didn't become aware of him until decades later.

What I think about this card now: Hall sure is happy in a lonely looking ballpark.

Other stuff: There is not a lot of information out there about Hall. He was mostly a reliever for some pretty good teams in the late 1960s Twins and early 1970s Reds. Apparently, he had good stuff, and put up good numbers as a reliever, but injuries got in the way. He was traded to the Mets just as the Reds began back-to-back World Series title campaigns. He pitched in 36 games for the Royals in 1976, but didn't receive a card the next year. He was then released by the Royals in 1977. 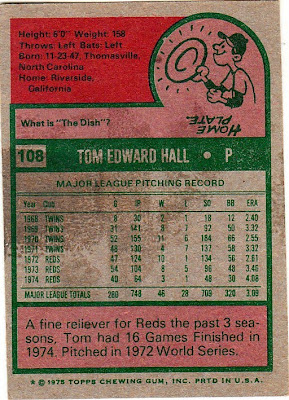 Back facts: Hall was just 158 pounds. Can you picture a pitcher weighing that little now? Tim Lincecum weighs 170 and everyone thinks he's tiny.

Other blog stuff: The green-light green combo has crept within one of the orange-brown combo, which is the overall leader right now. But orange-brown is about to put together a major streak. Will it ever be caught? The suspense is killing you, isn't it?
Posted by night owl at 1:54 AM

Unlike Barr, at least Hall looks like he wants to have his picture taken.

Hall was the opening day starter in 1969 for the Twins.

Hall had some great K numbers for 3-4 seasons.