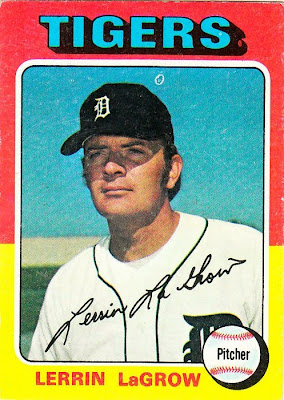 Card fact: Everyone knows that this is the only guy with the first name of Lerrin to pitch in the majors, don't they? Well now you do.

What I thought about this card then: I did not have it.

What I think about this card now: LaGrow looks older than he is, and in almost all of his cards he looks so darn serious. He resembles just about every adult man I knew when I was a kid. They all looked like they were an angry moment away from giving you a whooping.

Other stuff: Lerrin LaGrow is probably most known for having a bat hurled at him. During his second year in the major leagues, he pitched for the Tigers in the 1972 American League Championship Series against the A's. In the seventh inning of Game 2, Bert Campaneris came to the plate already 3-for-3 with two stolen bases. LaGrow hit Campaneris in the ankle with his first pitch. Campaneris responded by helicoptering the bat at LaGrow. Fortunately, LaGrow ducked and it missed. Both Campaneris and LaGrow were suspended for the rest of the series.

Later, LaGrow was an effective reliever for the White Sox. He also had a fairly decent year for the Dodgers in 1979. Just about everything about 1979 was indecent for the Dodgers, so that's a nice feat by LaGrow. 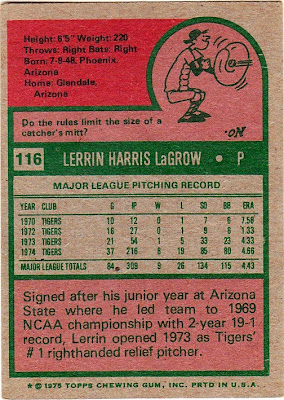 Back facts: I wonder if there is a size limit to catcher's gloves now? It seems like something someone would exploit.

Other blog stuff: I've yet to come up with an idea for this color combo name. I can't go with ketchup and mustard as I'm considering that for the yellow-red combo. I know red and yellow are very common in fast-food restaurants. McDonald's, Wendy's, Sonic, Denny's all use the colors. So I could go with the "food vendor" combo. Some marigolds are red and yellow. Fire is red and yellow if you're feeling particularly pyro. Any thoughts?
Posted by night owl at 1:25 AM

Why did LaGrow get tossed? Was there a warning issued before hand? I thought those were the days of the plate belonging to the pitcher.
I think those colors look like the bright frosting they use on birthday cakes nowadays.

I was growing up in Glendale while LaGrow lived there. I wonder if I ever ran into him at the mall or something.

-Mustard and Ketchup (instead of Ketchup and Mustard)
-Starburst Fruit Chews
-Lemon-Elmo
The bday cake idea's not bad.
btw...thanks for not calling it "Catsup" I HATE that. Don't know why.