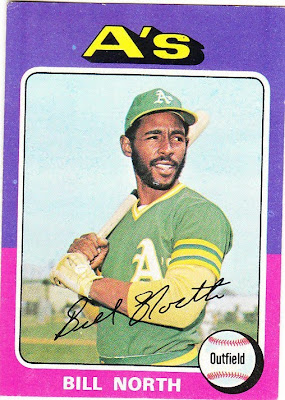 Card fact: This is just the sixth purple-pink card so far. This is a color combo that is expected to WIN the whole thing. Come on, purple-pink, let's pick up the pace!

What I thought about this card then: I didn't see it. But I really liked players with speed as a kid and North's 75 stolen bases in 1976 left an impression on me. When the Dodgers acquired him in 1978, I was thrilled. But things didn't work out like I had expected.

What I think about this card now: Almost all of North's cards look like this one -- standing there with a bat on his shoulder. Quite dull. His 1977 card is one of my all-time favorites. I'll have wax eloquently about it some day. But the rest are very unmemorable.

Other stuff: North was one of the best base stealers of the 1970s. He really made the A's dynasty of the mid-1970s go. He also helped bolster the A's reputation as a bunch of bickerers as he got in a clubhouse fight with Reggie Jackson that injured both Jackson and would-be peacekeeper Ray Fosse.

North was the last Swingin' A to leave during Charlie Finley's gutting of the three-time champions. He was traded to the Dodgers in May of '78. The Dodgers made the Series that year, but North hit just .234 with L.A and was a Giant the following year. 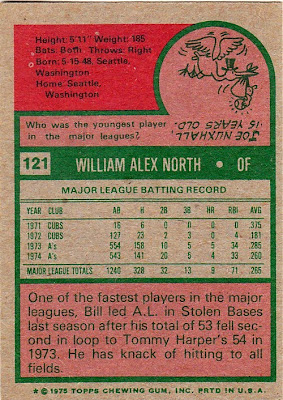 Back facts: The stork makes multiple appearances in the '75 cartoons.

Also, it's a real shame the '75 Topps cards did not include stolen bases. North led the American League in stolen bases in 1974 with 54. He was the A's stolen base king until Rickey Henderson arrived.

Other blog stuff: The No. 1 song in the country on this date in 1975 was "You're No Good," by Linda Ronstadt. One of the best pop songs of the year, in my opinion.
Posted by night owl at 3:00 AM

Second to the Phillies cards from the set, I've always loved the A's cards. Especially the purple-pink-green-yellow combo we see here.

Is it better to lose a player to the Giants or get a player FROM the Giants? (For a Dodgers fan)

Depends on the player. But usually I'm not happy to see a Dodger go to the Giants.