Card fact: This is just one of many examples in which the Phillies are paired up with the color green. I don't know why that is. But it happens again in the Topps sets of 1978, 1981 and 1988.

What I thought about this card then: I vaguely recall one of my friends having this card. But no other thoughts.

What I think about this card now: That is not good batting form.

Other stuff: This is terrible of me to say, but for a long, long, LONG time I thought Mike Anderson, an extra outfielder for the Phillies for several years, was one of the many players caught up in the Pittsburgh drug trials of the early 1980s. Those are the ones that exposed Dave Parker, Vida Blue, Lonnie Smith, Keith Hernandez and others as drug users. But after doing a little bit of research I didn't come across Anderson's name at all. I might have gotten him confused with Al Holland, who was also named in the drug trials and was a Phillie.

So, if my limited research is accurate, my apologies to Mr. Anderson for thinking unkind thoughts all these years.

On a completely unrelated note: If you have Anderson's 1979 Topps card, you know that it features one of the worst airbrushed caps (it's an Orioles cap) ever.

Other blog stuff: I'd like to take a moment to remember former pitcher Jim Bibby, who died this week at age 65. Bibby's card is coming up on this blog fairly soon, and he was always one of my favorite non-Dodger pitchers. I rooted for him in the 1979 World Series and he was the starting pitcher for the Pirates in the decisive Game 7 of that series. 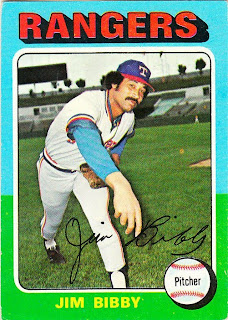 Ok, I laughed out loud again...it's 5:45 AM here for goodness sakes, when I read your Babe Ruth comment and looked at the cartoon. Laughter really is the best medicine.

I think you were confusing Anderson with Jerry Martin, another mid-70's Phillies bench jockey who was involved in the drug scandals.