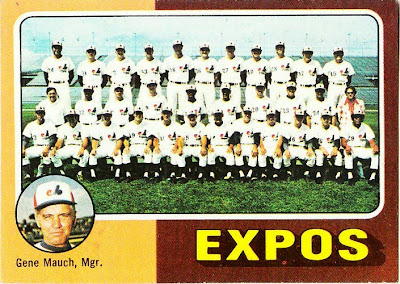 Card fact: In 1975, Gene Mauch was entering his seventh and final season as the Expos franchise's first manager. This would be his last card appearance as the Expos manager.

What I thought about this card then: Team card. No thoughts.

What I think about this card now: I did not know Evel Knievel was a member of the Expos' organization (middle row, last guy on the right).

Other stuff: Not much to say, so I'll show you the back of the mini card that I pulled in 1975: 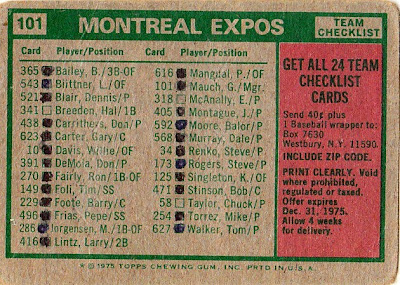 Notice that I filled in the boxes rather neatly for a 9-year-old. But that's because I wasn't 9 when I did that. A couple years after the set came out, I went back to my old cards and checked off any player for which I had a card, whether it was from the '75 set or not. So I didn't really have the '75 card for a number of those players back then. 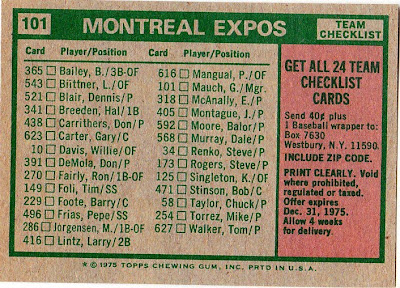 Back facts: You can see the beginnings of progress in the Expos with the listing of Gary Carter, who was in his first year in 1974, and pitcher Steve Rogers. But they didn't achieve a winning record until 1979.

Other blog stuff: Let's see if Topps left out anyone key from the Expos.

The most prominent player that wasn't pictured in the 1975 set was probably Larry Parrish. But he was just up from the minors with only 69 at-bats, so collectors wouldn't expect Topps to have a card of him (it was a different world in 1975 as far as rookies).

So the closest thing to a key player being left out is second baseman Jim Cox, who started more games at the position than anyone else for the Expos in 1974. He played in 77 games and had 236 at-bats but didn't get a card. Cox wasn't really considered a starter and played in just 24 more games the rest of his major league career, so Topps might have taken that into account. But that would have been Cox's best opportunity to be on a Topps baseball card. He never appeared on one. (Johngy points out Cox was on one of those 4-in-1 rookie cards in 1974).

Here is where the Expos stack-up with the other teams featured so far:

Gene Mauch, the pride of Salina, Kansas (or at least in my mind at least).

Cox shared a Topps card in 1974 with Bill Madlock and 2 others.

The 1975 Topps is my favorite of the vintage/old school sets. I had quite a large part of this set as a kid but I, like so many others, fell into that dreaded catagory of "my mom threw out my baseball cards". I also like this 75 Expos team card as I collect team cards as sort of a sidebar to my main collections.

P.S. I like both of your blogs very much and finally started "following" them.

Yes BA, My mom threw out my cards too. I had maybe 80% of the cards in this series... Very few Expos.
I liked gene mauch.
They sacked him , and brought in Karl Keuhl (Pronounced Keel), and the season was the worst ever for an expos team, and possibly in major league history. 52 wins 110 loses or something like that. Keuhl did not finish the season, and Charlie Fox was brought in.