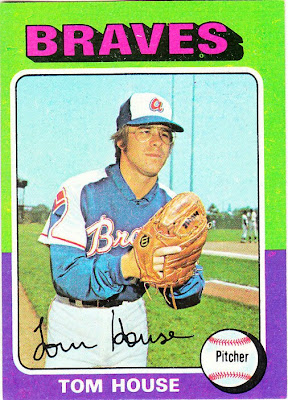 Card fact: This is the last card of Tom House before he donned the white man's afro that appeared on most of his subsequent cards.

What I thought about this card then: The inevitable. That House looked a little nerdy to be playing baseball.

Also, this is another one of those cards that I associate with my brother because it was one the cards he pulled early in '75.

What I think about this card now: I wonder what those two Mets in the background are discussing?

Other stuff: House will forever be known as the player who caught Hank Aaron's record 715th home run in the bullpen at Atlanta Fulton County Stadium. He caught it on the fly, which was something that I had wondered for a long time. I thought it might've bounced.

House was a relief pitcher for the Braves, Red Sox and Mariners from 1971-78. Out of 289 games pitched, he started in 21 of them, and most came at the end of his career with Seattle. During his time with Atlanta, he was one of the more consistent relievers in the National League. His ERA in 1974 was 1.93 in 56 games, probably explaining why House received a card number ending in "5" in this set.

After his playing career, House became a noted pitching coach. House studied sports psychology, earning his PhD, and used it during his coaching career. He was a key figure in Nolan Ryan extending his career those years when he was with the Rangers.

Several years ago, House famously confessed to experimenting with steroids during the '70s and said that many pitchers did so during that time. In fact, he said he believed that steroid use has declined since that time. 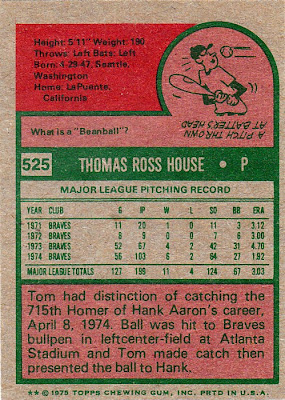 Back facts: I missed posting on House's birthday by a lousy day. I suppose if you're reading this in California or Hawaii as soon as I post this, then it still is House's birthday. So, I'll cling to that.

Other blog stuff: 1970s actress Jill Clayburgh was born on this date. For those who remember the '70s, she was in a lot of notable films (all of which I was too young to see), and it was sad to read of her passing a few months ago.
Posted by night owl at 1:42 AM

It's 11:39 pm in California so at the very least you can say that one of your readers read a post on that players birthday.

I think the Mets are discussing whether to give house a wedgie or a swirlie.

I think that cartoon batter needs John Doherty's batting helmet. I remember House's tenure with the Rangers. Pitchers are such wusses, what with always wearing the warmup jackets around.