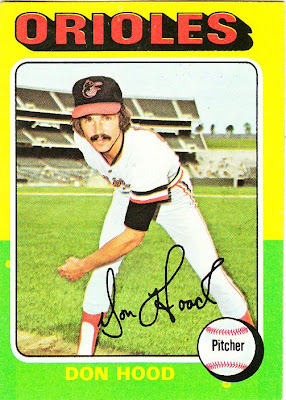 Card fact: This is Don Hood's sophomore card. It looks a lot like the photo on his 1974 card, although obviously not taken in the same stadium.

What I thought about this card then: Never saw it. First card of his I saw was his '76 card when he was with the Indians.

What I think about this card now: It looks very similar to this card. I'm wondering how the Orioles kept their relievers straight. And, strangely, Hood looked more like Burt Reynolds than Bob Reynolds did.

Other stuff: Hood was a relief pitcher with the Orioles, Indians, Yankees, Cardinals and Royals, lasting 10 seasons through 1983. He received some starts while with Cleveland, but spent most of his time as a middle reliever.

Hood was acquired by the Yankees in a trade with Cleveland. New York reliever Rich Gossage hurt his hand in a clubhouse brawl with teammate Cliff Johnson in 1979. The Yankees responded by shipping Johnson to the Indians for relief help in Hood. 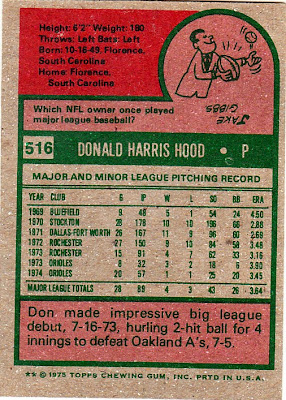 Back facts: All right, this cartoon has me confused and I'm too lazy to figure out definitively whether it's wrong or not. The only Jake Gibbs to play major league baseball was a catcher for the Yankees in the 1960s and early 1970s. He never owned an NFL team, although he was a college football star and was headed for an NFL career as a quarterback before signing with the Yankees. But Jake Gibbs is the only Gibbs to ever play in the majors.

So, either there's some other guy named Jake Gibbs, who went by another first name besides Jake and another last name besides Gibbs, or the cartoon is totally screwed up. And as for that famous NFL Gibbs, Joe, he never played major league baseball.

Other blog stuff: On this date in 1898, Phillies pitcher Bill Duggelby hits a grand slam in his first major league at-bat. That feat would not be repeated for 107 years when Jeremy Hermida of the Marlins hits a slam in his first at-bat in August of 2005.
Posted by night owl at 1:05 AM

I was reading that Bob Reynolds post you linked to. It mentioned that he fell just short of getting a MLB pension. It looks like this announcement from yesterday changed that.

Yeah, I think Topps done goofed. George "Papa Bear" Halas played for the 1919 Yankees, and I suspect that's the right answer. Maybe Gibbs was the answer to another trivia question and they mixed 'em up.

I couldn't find anything to contradict your findings about Gibbs. I also didn't know that George Halas played for the Yankees. Considering only 4 players have hit grand slams in their first major league at bats, it's amazing two of them were pitchers. It's also amazing that the two non-pitchers who did it (Kevin Kouzmanoff and Daniel Nava) did it on the first pitch.

The pose looks the same as the 1974 card, but the player doesn't. Either he had quite a tan on the 1974 card or it's not the same player.