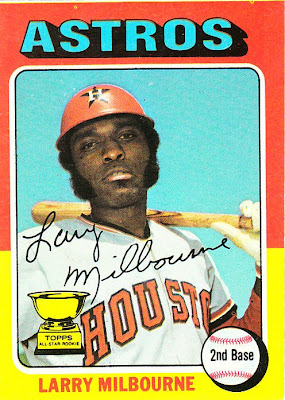 Card fact: It's been 178 cards since the last rookie cup card. That's the biggest gap between rookie-cuppers, with only one more rookie cup card to go.

What I thought about this card then: A little intrigued, a little freaked out by this Milbourne fellow. As a 9-year-old, I thought he was very distinctive. With the exotic sideburns and the helmet, he seemed muppet-like to me.

What I think about this card now: Milbourne looks a lot different here than he did for most of his career. After this card, he lost the crazy burns, grew a mustache and seemed ready to be accepted by society. With this card, I'm not so sure.

Other stuff: Milbourne may have won the Topps rookie cup, but he was not much more than a utility player for his entire 11-year career. He bounced from the Astros to the Mariners to the Yankees to the Twins to the Indians to the Phillies. He also had repeat stays with the Yankees and Mariners. He reached more than 400 at-bats in a season only once, in 1982, when he played for three teams.

Milbourne did play well enough for the Yankees to win plenty of playing time in the 1981 postseason. He hit .462 in New York's ALCS victory over the Oakland A's, and played in all six games for New York in its loss to Los Angeles in the World Series.

After his career, Milbourne managed in the low minors in the early 1990s. 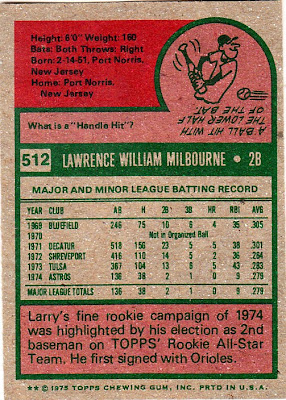 Back facts: Milbourne's "fine rookie campaign" consisted of 36 hits and nine RBIs. It was so impressive that Topps didn't make another card of Milbourne until the 1978 set.

Also, as a kid, I thought you could actually hit in a major league game by holding your bat upside down. Thanks to this cartoon.

Other blog stuff: We just need an outfielder to complete our All-Rookie team:

Milbourne went to my high school in South Jersey and I kind of, sort of "knew" him as my Dad was a guidance counselor at the high school at the time and he had known Larry (and his brother). I have a very, very vague memory of meeting him in the early '80s when he came back to town for some sort of function at our high school.

It was a big deal locally when the Phillies acquired him in 1982, and we were all a little bummed when the Phils sold him to the Yankees part way through the '83 season.

According to baseball-reference.com, the Orioles released Milbourne in April 1970, and he was not signed by another major league organization until April 1971.