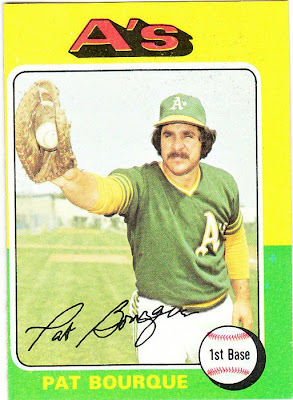 Card fact: This is the final card issued of Pat Bourque during his career. He appeared on just two Topps cards, the one being in the 1974 set.

What I think about this card now: Wow, that is a severely off-center card, and the photo appears to be out of register. I need to upgrade.

Other than that, Bourque really is playing the part of a Swingin' A, even though he was with Oakland for only two seasons. He's got the long hair and mustache down just like all of the full-timers.

Other stuff: Bourque was a part-time first baseman and pinch-hitter for the Cubs, A's and Twins between 1971 and 1974. The World Champion A's acquired Bourque from the Cubs in the middle of the 1973 season. Bourque went 1-for-3 in four games during the 1973 postseason.

The A's traded Bourque to the Twins in August of 1974, then reacquired him from the Twins after the season was over in late October. This must have both panicked Topps and then helped them. At first, Topps probably figured it would have to airbrush Bourque into a Twins cap since there would be no way for it to get a photo of him as a Twin at that late date. But then he returned to the A's in time for a relieved Topps to either use the photo it had planned to use of Bourque all along, or dig up an older photo of him from the 1974 Topps photoshoot.

Bourque was returned to the A's in a deal that sent Dan Ford to Minnesota. Bourque didn't end up playing in the  majors again, but Ford would have a long career for the Twins, Angels and Orioles well into the 1980s. 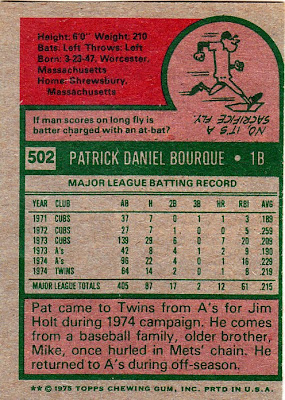 Back facts: You can see the last line of stats showing Bourque playing with the Twins, which would have confused me as a kid, given his appearance as an Oakland A on the front. The write-up illustrates Topps scrambling to keep up with the offseason moves. It mentions the summer trade at the start, then goes into his family background, then tacks on the most recent transaction at the end.

Other blog stuff: A happy 60th birthday to new Hall of Fame inductee Bert Blyleven.
Posted by night owl at 12:37 AM

FWIW, Bourque was born in the same city I was, and attended the same high school I did. The similarities between us end there, though....

That's practically an action shot for '75 Topps and an excellent color scheme to boot.