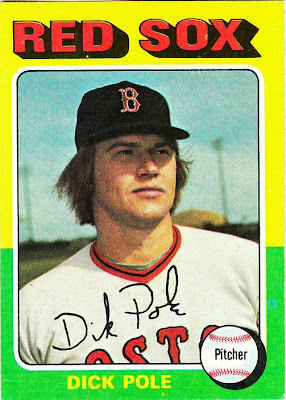 Card fact: This is Dick Pole's solo debut. ... I'm sorry, everything I write in this post is going to sound dirty.

What I thought about this card then: My brother had this card, since he was a Red Sox fan. We were oblivious to the name. We though his long straight hair was strange. Definitely dude-looks-like-a-ladyish. A real ugly lady.

What I think about this card now: I posted this card on a Monday. Because I thought you might need a laugh. Because I'm here for you, the reader. You're welcome.

Other stuff: Dick Pole, of course, goes in the baseball names Hall of Fame, if such a Hall of Fame was constructed by 11-year-old boys (or, ahem, immature collectors). I find it remarkable that he was able to operate in the public eye for so long with a name like that. It's truly admirable.

Pole began as a Red Sox prospect and started and relieved for Boston. His career was altered when he was hit in the face by a line drive off the bat of the Orioles' Tony Muser in June of 1975. The liner broke his jaw and damaged the retina in his right eye, eventually costing him most of the vision in the eye.

Pole later was drafted by the expansion Mariners and pitched two years for Seattle in 1977 and 1978. After that, he pitched in Mexico. He later made a name for himself as a pitching coach, mostly with the Cubs and the Giants, but he coached for a number of teams over two decades. He was most recently a coach for Cincinnati through the 2009 season. 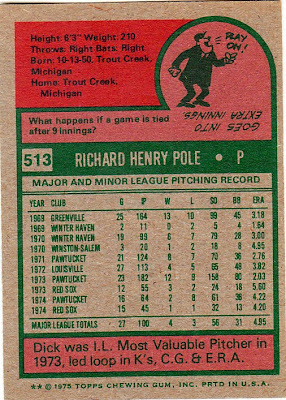 Back facts: Pole could have been known as "Richard Pole," but don't think that people would have grown wise to his disguise. Good for him, going by Dick. He wasn't afraid to whip it out there ... I know, I know, I should have more self-control than that.

Other blog stuff: I'm pretty sure that the whole fascination with Dick Pole and Pete LaCock came from this post. I could be wrong. Worth a read though.
Posted by night owl at 2:17 AM

Great name, great name. One of my favorites.

Did the Red Sox actually wear the all-dark caps at any time during the mid-70's? I've always seen pictures & videos of them wearing the red cap with dark brim, during that time.

I thought you handled Dick Pole pretty well...I mean, with a certain level of maturity. Obviously, I wasn't able to do the same.