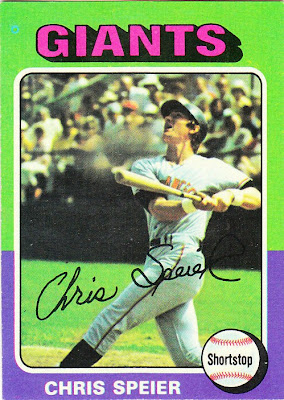 Card fact: One of the best cards in the entire set. Definitely in the top 10. And that is 100 percent fact. No opinion there. I'm a Dodger fan for crying out loud!

What I thought about this card then: Absolutely loved this card. Would not trade it for anything.

What I think about this card now: Well, he's a Giant, so I hope he's just hit a pop fly out.

Other stuff: Chris Speier had a remarkably long career, lasting from 1971-89. He started his career with the Giants and ended it with the Giants. In between, there was an eight-year period with the Expos, and bit parts with the Cubs, Twins and Cardinals.

Speier started out as a hot-shot youngster with San Francisco and made his only All-Star teams in the second, third and fourth years of his career. But he settled into a pattern as kind of a mediocre hitter. His main attributes were a strong glove and decent walk totals. He hit .246 for his career.

After he was done playing, he coached and managed for several minor league teams in the Cubs, Giants, Diamondbacks, A's and Brewers systems. Most recently, he has been the bench coach for the Reds.

Speier is the father of major league relief pitcher Justin Speier, who last pitched for the Angels in 2009. 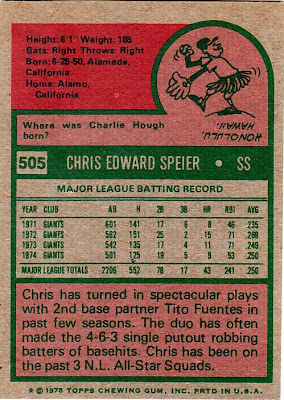 Back facts: I suppose if it's a Giant card, you've got to put a Dodger pitcher in a grass skirt. Whatever amuses you.

Also, I don't understand the write-up. What is the 4-6-3 single putout? And why is base hits one word?

Other blog stuff: Presenting the original Chris Speier card I pulled in 1975, which I've also mentioned on the other blog: 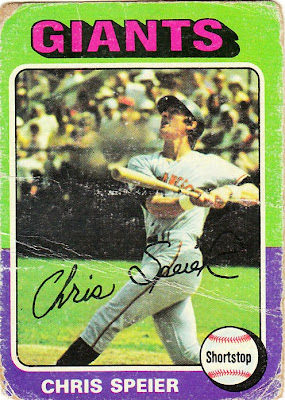 Thing of beauty.
Posted by night owl at 2:23 AM

Chris Speier was always in great cards. That's probably why he was one of my favorite players when I was a kid.

4-6-3...Tito dives and flips ball to Speier who throws to first? Seems like a stretch to list that.

I'm still bitter over the last World Series, but that is a great card.