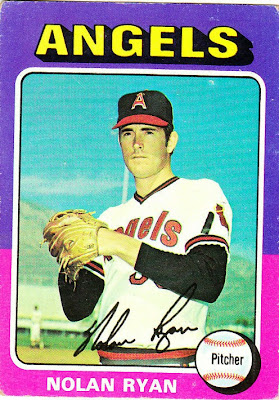 What I thought about this card then: My brother had this card. I associated Nolan Ryan with him for a period.

What I think about this card now: Out of all the cards in this set that I would like to upgrade (there actually aren't that many), this is at the top of the list. But it's such a pricey card, that I've never pulled the trigger on another one.

Other stuff: So what do I say about someone who many consider the greatest pitcher of all-time? Well, I had a feeling of indifference toward him for much of his career, combined with periodic disgust and admiration.

Ryan pitched for teams that were a long way from me -- the Angels, Astros and Rangers (I don't remember his Mets days). I remember him mostly with the Astros. I can recall working as a paper boy and reading about him signing his big contract with Houston as I bagged newspapers.

I wasn't very happy when he no-hit the Dodgers for his record fifth no-hitter. I remember one of the networks switching to the Astros-Dodgers game to show Ryan's 9th inning and pleading with Dusty Baker to get a hit.

But the rest of his career -- on and off the field -- has been enjoyable. I like that he was able to assemble a Rangers team that finally could win some games and reach the World Series. I've been waiting for that ever since I was a collector in 1975. 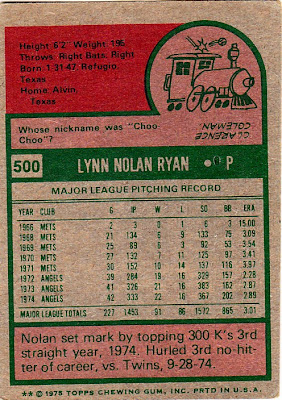 Back facts: I have known that Ryan's real first name is Lynn for a long, long, long time. I had a crush on a girl in 9th grade whose name was Lyn. It was the first time I knew anyone with that name since I read the back of the '75 Ryan card. I wondered whether the female version of the name had just one "N." You know, like Francis and Frances. I still don't know for sure.

By the way, the last name of my 9th grade crush is the same as a super-famous rookie one-year wonder. Feel free to guess.

Other blog stuff: It is time to take a moment to review the set.

The orange-brown combination continues to lead the way, but its lead is getting smaller and smaller. Other combinations have crept closer, led by the pink-yellow combination, which is just three cards away:

Cleaning up here. 15 more powder blue appearances, adding up to 64, so far.

Six more players looking into the distance for a total of 17. I would've thought there would be more.

Not a single player looked girlie in the last 100 cards. The 400s must be the domain of the manly. Grand total stays at 9.

Nine more players are no longer with us. That's a total of 48 so far.

Don Carrithers is added to the list. Four players so far were not afraid to display that disgusting habit.

Three more players had sons that played in the majors, too. That's a total of 22 at this point.

Not a single rookie cup in the last 100 cards.

Jim remains ahead of Dave/David. Twenty players in the set are named Jim.

Another mini surge. There have been 78 cards so far that I have in mini form. That's up to 15.6 percent of the set.

OK, I'm done looking back. ... Well, not really. The whole blog is about looking back, isn't it?

Anyway, the next card is a dude named Robinson. But it's not the guy you're thinking of -- unless you know this set very well.
Posted by night owl at 2:56 AM

Was your classmate's last name Charboneau? ;)

Don't upgrade this card. I have an extra one in great shape I will send along with a couple other cards.

Congrats on hitting #500! It's a mighty milestone.

I've been waiting for this one...how great is it that the "Ryan Express" has a Choo-Choo cartoon?!