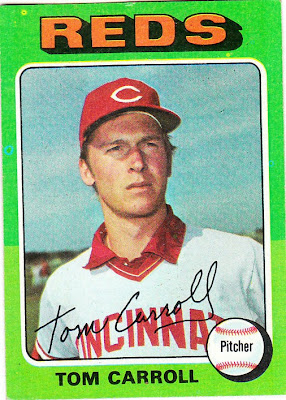 What I thought about this card then: I had the mini card. So, this is one of those cards that to this day  looks right only in mini form. The regular size looks too LARGE.

What I think about this card now: I never understood the collared look with the uniform jersey.

Other stuff: For a long time, I thought Tom Carroll was related to fellow Reds pitcher Clay Carroll, but he's not.

Carroll had a two-year major league career with the Reds. He pitched in 28 career games, going 8-4 in 125-plus innings. After two years with Cincinnati, he spent all of 1976 in the minors. He was then traded to the Pirates but didn't make the majors and retired soon afterward.

Carroll later became an analyst for some engineering/information technology corporation. I won't go deeper into it than that because his job profile makes my head hurt. It's safe to say he's a pretty smart dude. 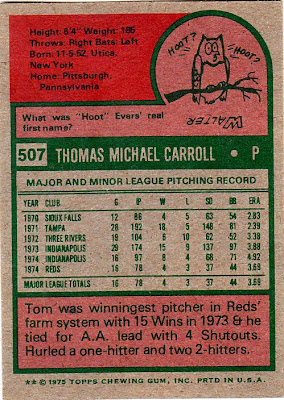 Back fact: The cartoon might look a little familiar to you if you read my other blog. I used this cartoon -- altered, of course -- and placed it on the sidebar.

Here it is. All professional-like and everything:

Other blog stuff: I recently went to a card show and upgraded a handful of '75s. Some of the off-center cards look OK in person, but are glaring on the blog. I don't plan to scan these new cards in place of the ones I have on the blog already, so I'm not sure why I'm mentioning it here.

But I suppose if it has to do with '75s then it should be mentioned here. So here are the upgrades: 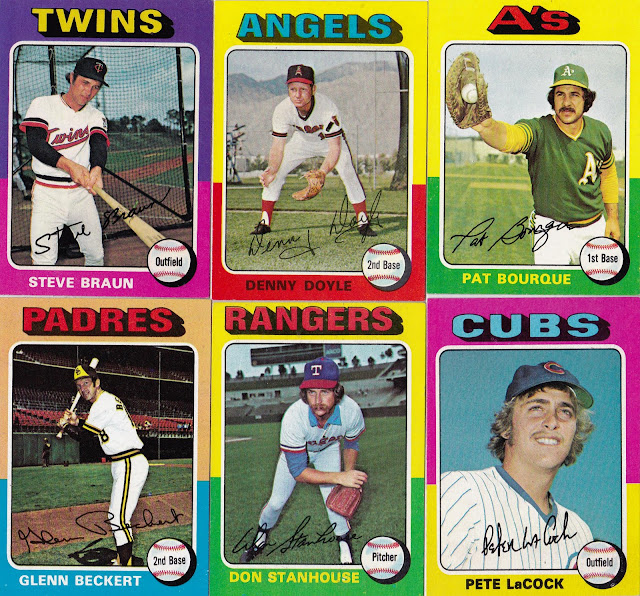 I laughed when I saw the cartoon and I was hoping you would mention your altered version.