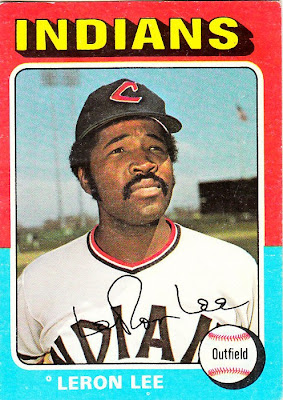 Card fact: I am not convinced that Leron Lee is not airbrushed into an Indians uniform on this card. If there is airbrushing it appears almost imperceptible. The uniform looks like an actual uniform and the cap looks like a real Indians cap. It doesn't seem possible that they were airbrushed. But the stadium background makes me suspicious. It seems to be the same background that is on his 1974 Topps card, when he was with the Padres. If that's the case, then why would a player in the American League be in a National League stadium?

Lee was obtained off waivers by the Indians on March 28, 1974, which seems like plenty of time for Topps to obtain a photo of Lee as an Indian. But that wasn't always the case in the '70s.

What I thought about this card then: This was one of the cards that I obtained early on in my first year of collecting. Probably not in those first packs I purchased, but not long afterward. Wait until you see the condition of the original.

What I think about this card now: It appears, by his signature, that Lee should have been referred to as LeRon Lee. But that's not how his name appears in the record books.

Other stuff: Lee was mostly a part-time player for the Cardinals, Padres, Indians and Dodgers between 1969-76. His biggest claim to fame may have been breaking up a Tom Seaver no-hitter in the ninth inning with a single during a game between the Padres and Mets in 1972. The Mets have still yet to pitch a no-hitter.

But Lee drew the most acclaim in Japan. He played there for 10 years after is major league career and is one of the most successful American-born players in Japanese baseball. He owns the highest career batting average by a Nippon Pro player at .320.

Lee later worked as a hitting coach. He is the uncle of Orioles first baseman Derrek Lee. 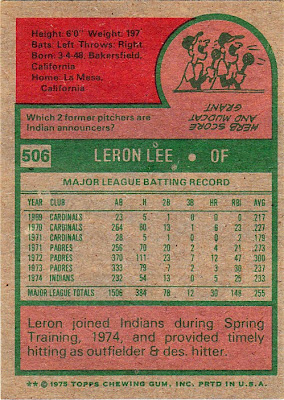 Back facts: I had no idea who Herb Score and Mudcat Grant were at the time I pulled this card, but I've known the names for more than 35 years.

Other blog stuff: OK, here is the Lee card that I pulled from that pack in the spring of 1975: 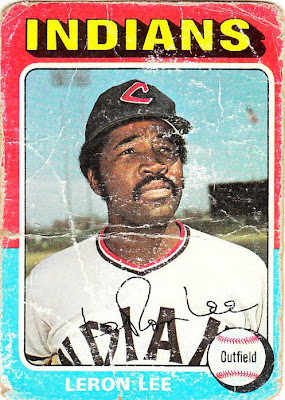 I'm sure that made its way into a back pocket at some point.
Posted by night owl at 12:02 AM

It could be a spring training stadium, since I think the Indians trained in Arizona and the Padres were in Yuma.

That looks like it was carried in a wallet, but I doubt a Dodgers fan would carry an Indians card there.

I believe this photo was taken in Shea Stadium. That two pole light tower in left field gives it away. And the Yankees played in Shea in '74, so that explains your confusion about how the pic could be taken in the same park as his '74 Padres card.

MJ is absolutely correct and if you see card # 487 in the 1976 TOPPS set you will find LeRon Lee posed there as well, this time with Dodgers, as Shea was one of their more popular spots to shoot visiting players ...

On closer examination of many other cards one will find similar backgrounds along the third base side out in front of third base dugout at Shea ...

And, YES, LeRon Lee did sign his name this way at times years ago.