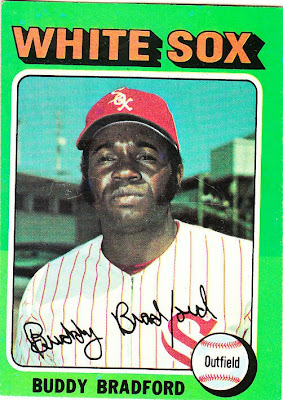 Card fact: This is the second and last card of a player named Buddy in this set. The other was Buddy Bell.

Actually, there is a third player named Buddy in the set. Buddy Solomon was a pitcher for the Dodgers that we'll see when the Rookie Prospects cards show up. But he is referred to by his given name "Eddie" in this set.

What I thought about this card then: I didn't see it. In fact, there was an African-American pitcher named Larry Bradford who pitched for the Braves in the late '70s. By the time I was aware of Buddy Bradford, I assumed they were the same person and Buddy decided to go by his given name of "Larry."

What I think about this card now: It is all kinds of miscut. I might have to search out a new copy at the card show coming up.

Other stuff: Bradford was a platoon-type player for several teams, mostly the White Sox, between 1966-76. He didn't hit for a high average (.226 for his career), but he had some power, which kept him attractive to some teams. The Indians, Reds, Cardinals and the White Sox, for a second time, all traded for him.

After his major league career ended in 1976, Bradford played for a year in Japan. He later became a successful businessman. 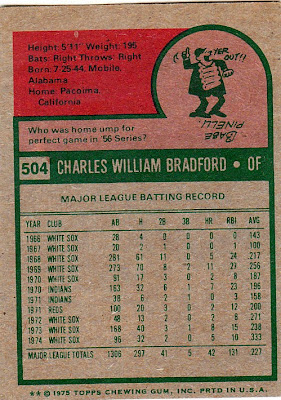 Back facts: OK, I am going to say this one time. The final pitch that Don Larsen threw to pinch-hitter Dale Mitchell that was called strike three by Babe Pinelli and clinched the only perfect game in World Series history was NOT A STRIKE. Too close to take? Maybe. But irksome just the same.

Other blog stuff: Today's date produced plenty of baseball breakthroughs. On this date in baseball:

I was really enjoying the list of events that happened until you got to Chan Ho. He remains one of, if not the, worst signings in Rangers history.