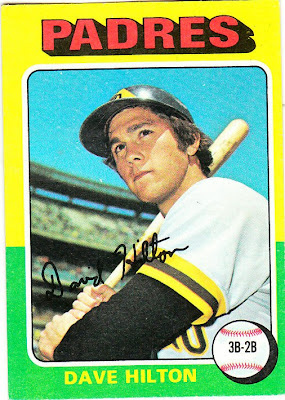 Card fact: This is the second straight card of a player wearing a batting helmet. I suppose you're wondering if that's the first time that's happened. Nope. It happened once before. Card #375, Roy White, and Card #376, Steve Yeager.

I look so you don't have to.

What I thought about this card then: I had the mini card. I had a lot of mini cards of Padres for some reason. They were a mini kind of team.

What I think about this card now: It's a card I've had some difficulty finding well-centered. The previous Hilton card I had was WAY off.

Other stuff: Dave Hilton's career spanned just 1972-75, but he's featured on two notable cards. The first is his rookie card in the 1973 Topps set (he is referred to as "John Hilton." He shares it with Mike Schmidt, so it's better known as Mike Schmidt's rookie card. Also, I prefer to call it "Ron Cey's second-year card," because my favorite player, Cey, is the third player on that card.

The other notable Hilton card is his 1977 Topps card in which he's airbrushed into a Blue Jays uniform as expansion Toronto acquired him in October of 1976 from the Padres. But Hilton never played in the majors for the Blue Jays. In fact, his final major league season was 1975, two full years before his 1977 Topps card came out. Oops.

Hilton played his entire major league career with San Diego, never playing in more than 74 games in a season and hitting .213 for his career. He played in Japan in the late '70s, then return to the U.S. for a couple more minor league seasons. He later worked as a coach with the Brewers and managed in the minors. 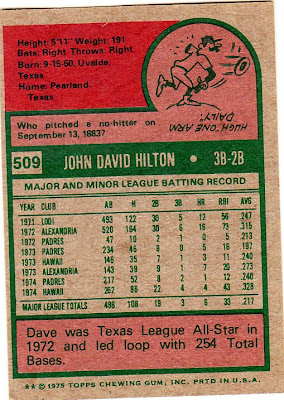 Back facts: Hugh "One Arm" Daily lost his left hand in a gun accident. He was a standout pitcher in the 1880s and a fan favorite. But he was a hot-headed, cranky son-of-a-gun who switched teams often because he was uncontrollable.

Other blog stuff: Pete Rose is 70 years old today. Can you believe it?
Posted by night owl at 3:16 AM

He must have enjoyed his last trip to Hawaii. He was born in Texas...so that's a good thing. I've got nothing. It's late.