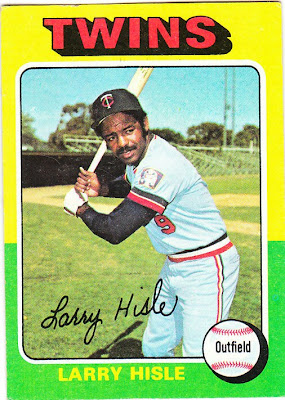 Card fact: There is no way Tom House gets a card number ending in "5" and Larry Hisle does not. The fact here is Hisle got robbed.

What I thought about this card: then: No knowledge of it.

What I think about this card now: My, that's a tiny, neat signature.

Other stuff: Hisle came up with the Phillies and made an immediate impact, placing fourth in the Rookie of the Year honors in 1969. But he slumped badly the following year and found himself bouncing from team to team, from the Phillies to the Dodgers to the Cardinals to the Twins, all within a year.

Hisle found his spot in Minnesota, hitting for a high average and driving in at least 90 runs a year. By the 1977 season, he was a hot commodity, and he signed with Milwaukee as a free agent. In 1978, he hit 34 home runs and knocked in 115 and finished third in the A.L. MVP voting.

But the following spring, he tore his rotator cuff while throwing. He played in no more than 27 games the final four seasons of his career, finally retiring after the 1982 season.

Hisle worked as a coach after his playing career. He was batting coach for the Blue Jays championship teams in 1992 and 1993. For the last decade or so, he has worked with the Brewers in its youth outreach program. Both of Hisle's parents died by the time he was 11, so he works with a number of at-risk children. 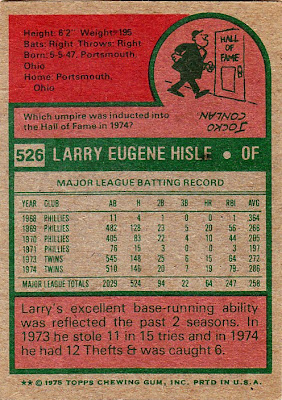 Back facts: Hisle was a decent base-stealer, but I don't think the stats cited by Topps exactly show that. Twelve steals in 18 tries doesn't seem "excellent" to me.

Other blog stuff: On this date, singer Rita Coolidge was born. I am really testing your knowledge of the '70s with this reference, but if you know the '70s, then you know who she is.
Posted by night owl at 2:29 AM

Hey I know Rita, that's Calvin's wife right? Just kidding. I was going to comment on Topps overstating the "excellence" of his base-running, but you beat me to it so I won't. Maybe during his downtime from working with at-risk kids, he can teach modern major leaguers how to sign autographs.

I always feel his acquistion by the twins was one of the best moves in franchise history. He also made a rare career transition from lead off hitter to clean up hitter while with Minnesota.

Just unfortunate that he didn't stay a twins. I can't blame him however, some sources indicate that he made over 10 times his yearly salary with the Brewers than he did with the Twins.