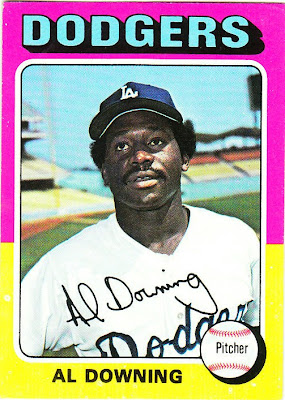 Card fact: I don't totally remember, but I believe this was the first Dodger that I pulled from a pack of '75 minis.

What I thought about this card then: I really did like the pink & yellow cards in this set. This is the only Dodger player with the pink-yellow border, so I held it in high esteem.

What I think about this card now: I'm not sure where Al Downing is standing in the ballpark, but the photo angle presents a nice outfield view of Dodger Stadium.

Other stuff: Downing is known most for surrendering Hank Aaron's record-setting 715th home run in 1974, but he had a full career with several successful seasons. It took me a long time to learn that Downing was a regular starter during the Yankees' dynasty days of the early 1960s. He led the American League in strikeouts in 1964.

Downing continued to start for New York until the late '60s when injuries forced him to the bullpen. He was traded to Oakland in 1970, then traded to Milwaukee six months later, where he went 2-10 to finish the 1970 season. Milwaukee sent Downing to the Dodgers in a deal for Andy Kosco. Downing followed by going 20-9 for L.A. and winning the Comeback Player of the Year Award.

Downing had a couple more seasons as a starter for L.A. before he became a part-time starter/reliever between 1975-77.

Downing has worked as a broadcaster and is on the speaker circuit with L.A. He signed at a card show I went to a few years ago. I had a chance to talk to him, just me and him, but I was too absorbed in cards to realize the opportunity. Oh, well. 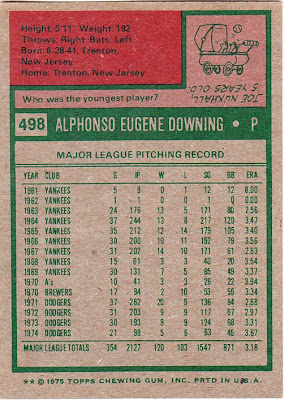 Back facts: Topps means "Who was the youngest player in Major League history?"

What IS he looking at?

At first glance I thought it said the youngest player was 5 years old. I had to click on the card to see the "1".