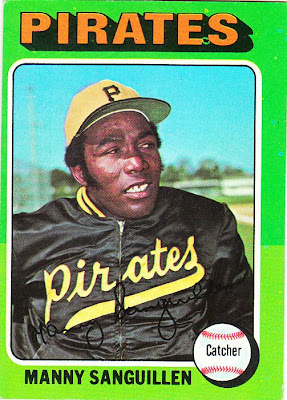 Card fact: This photo appears to have been taken on the same day as this one. Must've been pretty chilly down there in Florida that day.

What I thought about this card then: I didn't see it. The first card of Manny Sanguillen's I saw was the electric fireball 1976 card.

What I think about this card now: Sanguillen has several classic cards, but this is not one of them. He looks a little perturbed by what he sees to his left.

Other stuff: Sanguillen was one of the best hitting catchers of the 1970s, part of a renaissance at the position, led by Johnny Bench and also including Carlton Fisk, Thurman Munson and Ted Simmons. In 12 seasons with the Pirates (and one with the A's), Sanguillen hit .296 for his career and was a three-time all-star.

Sanguillen was famed for his free swinging. Vladimir Guerrero reminds me a lot of what Sanguillen used to do. He used to swing at balls that seemed to be a foot over his head.

In 1971, he hit .379 in the World Series against the Orioles, supplying more hits than anyone besides Roberto Clemente. After Clemente's death, Sanguillen was tabbed to replace Clemente in right field, but the move didn't work and Sanguillen returned to catcher.

Sanguillen was famously dealt to the A's for manager Chuck Tanner, who ended up leading the Pirates to the 1979 World Series title. Sanguillen was back with the Pirates by then as Oakland returned him to Pittsburgh one year after acquiring him. 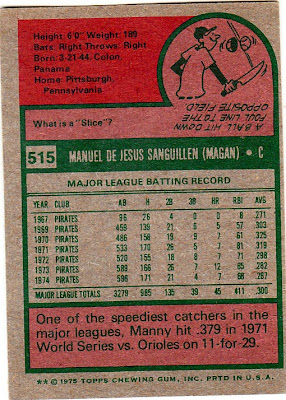 Back facts: Sanguillen recorded only 35 stolen bases in his career.

Other blog stuff: Today is Dodger manager Don Mattingly's 50th birthday! Win one for the birthday boy today, guys.
Posted by night owl at 1:01 AM

Another violent cartoon...it's a wonder you didn't grow into a violent Owl with all these bad influences.