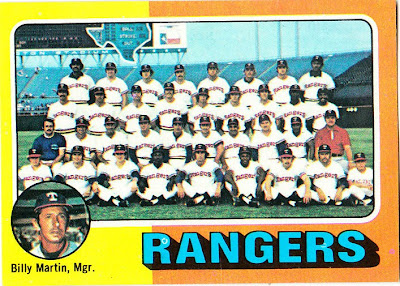 Card fact: Let's see if I can convince myself that Billy Martin is wearing Rangers garb in the inset photo. He is airbrushed into a Rangers cap in the 1974 set. This cap looks more realistic, but the jersey almost looks like a road Twins jersey. Martin was manager of the Twins in 1969, but I don't believe he had facial hair at the time. And why would Topps drag out a five-year-old photo of Martin, especially when he managed the Tigers from 1971-73? So I'm saying Martin is definitely wearing a Rangers get-up.

What I thought about this card then: Just like the last team card featured, the Astros, I had this card in mini form. No thoughts other than it was itty-bitty.

What I think about this card now: The Lone Star scoreboard rules. Also, I believe Jim Bibby and Fergie Jenkins are book-ending the back row. They always grow pitchers bigger.

Other stuff: The Rangers had their first real encounter with contention in 1974, thanks to Martin's first full season with the team. Texas finished second in the A.L. West after being dead last in 1972 and 73. The Rangers were third in 1975, but Martin didn't make it to the end of the season. He was fired when the Rangers got off to a 44-51 start. 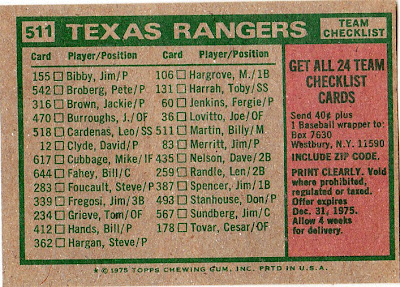 Back facts: There is not one thing out of place on this checklist. No misspellings, players out of order, unlisted players. Nothing. Probably not the first one in the set, but there's probably only been 5 or 6.

Other blog stuff: Here is where we see how well Topps represented the 1974 Texas Rangers.

The Rangers used 38 players to get out of the basement in 1974. Topps featured cards of 25 of those players. That includes Alex Johnson, who is airbrushed into a Yankees cap in the 1975 set. Nobody significant from the team was overlooked. Catcher Duke Sims, at the end of his career, had the most at-bats of players not featured with 118. There were an awful lot of fringe players on the team, though.

So that puts Texas at 65.8 percent, which is in the bottom third of the list so far:

Love that scoreboard! I guess I can settle with the lower third on this list so long as we're on top of the A.L. West.

billy is wearing tigers garb it looks like to me

I realize I'm coming 7 years late after the last comment to this blog, but I'm just going through the blog for the first time in 2018. Interestingly, Martin was canned by the Rangers in 75 and found work in 75 with the Yankees who canned Bill Virdon in 75 but he also found work with the Astros in 75. Probably the first time that's ever happened twice in the same season.
It would have been really wild if Virdon replaced Martin...