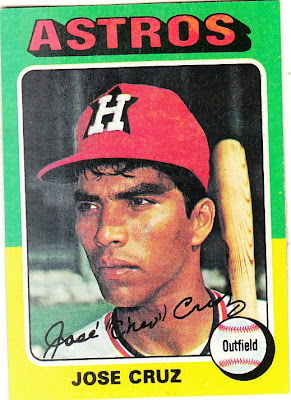 Card fact: Ladies and gentlemen, the second-worst airbrushed cap in the entire set. Rudy May is still the worst, but this is very piss-poor.

What I thought about this card then: Unfortunately, I never saw it.

Other stuff: Jose Cruz was one of the most popular and effective hitters ever to play for the Houston Astros. I remember him being a pain in the booty to the Los Angeles Dodgers during the 1980s. He was the one player that I feared on that team.

Cruz started out in St. Louis, but was purchased by the Astros in late October of 1974, necessitating the airbrushed monstrosity. Cruz blossomed with Houston and became very popular as the Astros began to field contending teams in the '80s. I remember Howard Cosell being particularly enamored with Cruz during the 1980 postseason.

Cruz was an All-Star only twice despite three straight seasons of hitting above .300 during the mid-1980s. He lasted 19 years, retiring after part of a season with the Yankees in 1988. He later became a base coach for the Astros for a number of years, only recently departing in 2009. 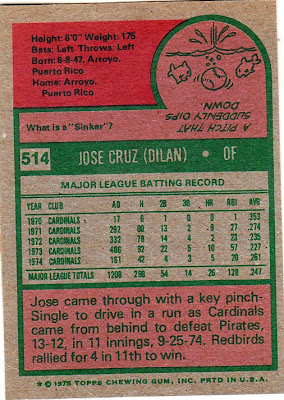 Back facts: I'm pretty certain that sinker cartoon has appeared in other years of Topps sets.

Other blog stuff: OK, it's not Jose Cruz's birthday, but it IS his son Jose's birthday today. The former Mariner, Blue Jay, Giant, Diamondback, Red Sox, Dodger, Padre and Astro is 37 today.
Posted by night owl at 3:12 AM

How cool would it be to have a Major League dad?

The capitalization of Single in line two is making me a little crazy.

Jose was one of my favorite non-Chicago players. I met him on the field shortly before he was dismissed in Houston. Great timing. He was super nice, giving me several minutes of his time.