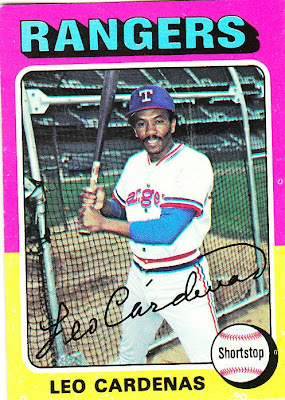 What I thought about this card then: Never saw it. It was decades before I knew who Cardenas was. I'm still not entirely clear.

What I think about this card now: The batting cage is the star of the show in this photo, isn't it?

Other stuff: Cardenas was a starting shortstop mostly with the Reds and Twins. He still has a connection to the city of Cincinnati, making regular appearances at club functions. He enjoyed his best seasons with the Reds and was a four-time all-star there. He won a Gold Glove in 1965.

Cardenas was traded to the Twins on Nov. 21, 1968. He played there through the 1971 season and was a regular part of the Minnesota A.L. West champion teams of the late '60s/early '70s. He closed out his career with the Angels, Indians and Rangers. 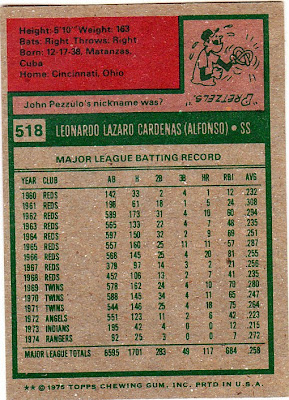 Other blog stuff: The pink-yellow border combo is now just one card away of catching the orange-brown combo for the No. 1 spot. Can you feel the excitement?

Yes, the batting cage is the star, but Leo looks pretty happy in that shot. I'm probably wrong, but it seems like it's been a while since we've seen a card back filled up like that. I wish the Rangers would play a game in those uniforms. I like the old Ranger look.